With the Mayan end of world threat over, it's time to focus on the fiscal cliff

Welcome back from your holiday festivities. I hope you got everything you asked of Santa.

Not to run the Jan. 1, 2013, deadline into the ground, but since we avoided the Mayan end of days, the possible coming U.S. financial calamity has totally taken center stage.

So now we get to wait to see if there will be a post-Christmas miracle in the form of a fiscal cliff deal.

Senators and the President are expected back in their offices on Thursday, Dec. 27. Representatives are awaiting word to return to Capitol Hill.

Right now it's looking more and more likely that at best a partial deal will be reached to keep tax rates at the Bush tax cuts level for most taxpayers. Other details then must be worked out when the new Congress convenes in 2013.

In case you forgot in the wake of holiday merry making, the infographic below provides a quick look at the tax matters that matter in the fiscal cliff debate. 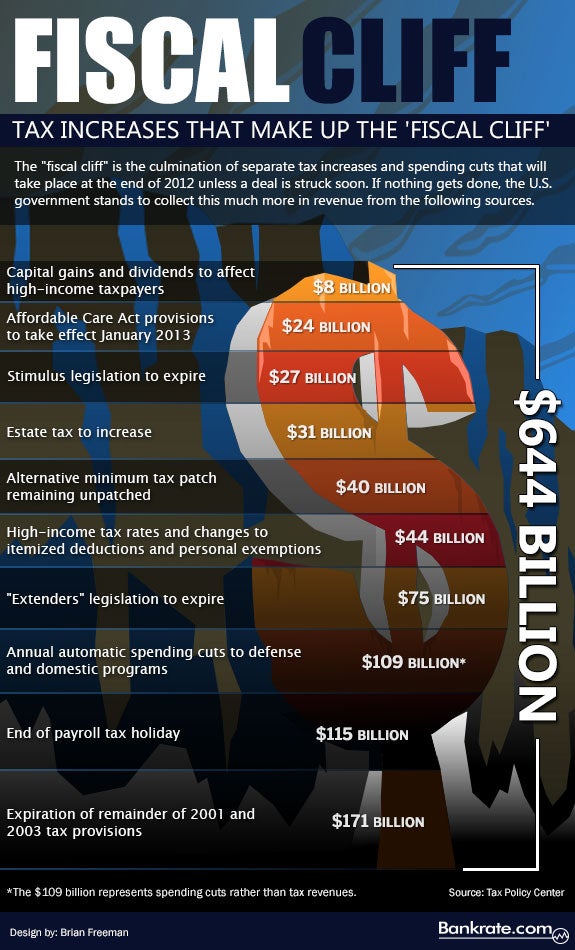 Among the things most folks are hoping will be done in the next few days are a patch to the alternative minimum tax, or AMT, so that they aren't among the estimated 60 million who'll owe this more expensive parallel tax, and approval of the extenders, technically temporary tax provisions that expire every year or so and are renewed.

House Speaker John Boehner included an AMT fix in his Plan B that his Republican colleagues rejected just before going on holiday breaks. But at least he created a framework -- and one that includes proposed 2012 AMT exclusions of $78,750 for joint filers and $50,600 for single taxpayers and which would be indexed for inflation so we wouldn't find ourselves in this predicament year after year after year -- from which to start in these hectic closing days of 2013.

Similarly, the Senate Finance Committee gave its stamp of approval to most of the extenders in a bill it moved through that tax-writing committee last summer. It, too, is a good foundation to use for approving these tax provisions, which include such popular tax provisions as:

Tuition and fees for higher education tax break, also an above-the-line claim, worth up to $4,000.

Roll over of an IRA required minimum distribution (RMD) to charity so the taxpayer can meet the withdrawal requirement but avoid including the retirement fund money as a taxable distribution.

The Senate Finance members also OK'ed AMT relief with exemption numbers for 2012 identical to Boehner's proposal. But instead of indexing after that, the Senate tax writers propose AMT exemptions of $51,150 for individuals and $79,850 for married filing jointly spouses in 2013.

Here's hoping that we all get a few after-the-fact tax presents in the next few days. I'm leaving my Christmas tree up for a while just in case.