A glimmer of hope for a fiscal cliff deal

Don't get too excited, but there appears to be some optimism that a fiscal cliff deal might be near in advance of a mid-afternoon White House meeting with Senate and House leaders.

I'm not going to get into blow-by-blow reporting of the negotiations, but it seems that as is too often the case in Washington, D.C., lawmakers might be coming to terms -- and their senses -- on a last-minute deal to stave off the implications of the Jan. 1, 2013, fiscal cliff deadline.

OK, picky calendar watchers, the real effective date is Jan. 2, since that's the first business day of the new year, but technically the legal deadline for all the tax and spending changes to kick in is the Jan. 1.

House Speaker John Boehner (R-Ohio) and Minority Leader Nancy Pelosi (D-Calif.) will join Senate Majority Leader Harry Reid (D-Nev.) and Minority Leader Mitch McConnell (R-Ky.) at a 3 p.m. ET meeting at the White House with President Obama and Vice President Biden. It's the first get-together of the Congressional leaders and the Administration since before Thanksgiving.

Granted, it's a slow process. As I watch the various TV news reports and read the many, many articles that keep popping up in my Web browser every few minutes, I can't help but think of the Tin Man pleading for his oil can. 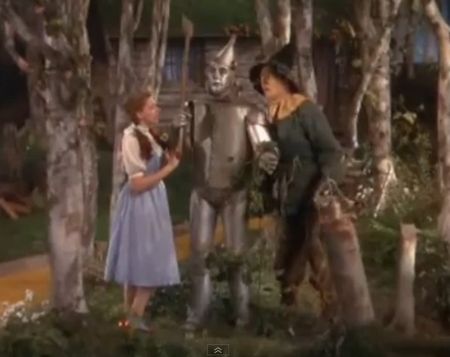 Click image to see Dorothy and the Scarecrow rescue the rusted Tin Man in "The Wizard of Oz."

If this afternoon's meeting can grease the wheels of compromise even a little, Washington might just begin flexing its creaky legislative joints enough to get lawmakers moving a bit further down the fiscal cliff yellow brick road.

What's on the table? Word is that the prez is offering to up the top tax rate income level from $250,000 to $400,000 (as he agreed to in an earlier negotiation with Boehner) in exchange for extension of unemployment benefits set to expire next week, the Medicare doc fix that would keep physician reimbursements under that program at the same level, another one-year patch to the alternative minimum tax (AMT), continuation of most tax extenders and the nullification of mandatory across-the-board domestic and defense spending cuts.

A non-tax component also reportedly in the mix is one-year-extension of the farm bill so that we wouldn't be facing $8 a gallon milk prices early next year.

A sweetener for Republicans could be some White House/Democratic give on the estate tax, which is scheduled to go from the current $5.12 million exclusion amount to $1 million in 2013, with the tax rate going from 35 percent to 55 percent. Democrats generally have called for a $3.5 million estate value limit and a 45 percent tax rate.

As Boehner suggested last week when he announced the failure of his Plan B and then essentially dropped the mic and headed home for the holidays, the deal now hinges on the Senate.

If a measure can be crafted that McConnell can ensure will make it through the upper chamber without a filibuster, Boehner likely will agree to push it through the House.

Veteran Capitol Hill watchers say the first indication of the success or failure of this latest fiscal cliff summit will be who says what to reporters after the meeting.

If Boehner is an active participant in media moment, a deal is likely done.

If not, get ready for an early January deal and hope that the reaction to the delay doesn't do irreparable damage to taxpayer or U.S. finances.