Would a limit on tax deductions mean less charitable giving?

We would have had Dallas Cowboys Suck Sunday, but they did that on Thanksgiving Day. (Sorry. Digressing and still working through my life-long fan issues.)

And today is #GivingTuesday.

The idea, being promoted by GivingTuesday.org and founded by a coalition of nonprofits, business, individuals led by New York City's 92nd Street Y, was created as a day on which America comes together to give back.

As the hastag in front of the name indicates, Twitter and other social media outlets are key to the program. It's working. So far, #GivingTuesday has enlisted more than 2,000 partners who are encouraging people to give their time, service and money today, Nov. 27, to help organizations who help others.

A time for giving: The timing is perfect. Most charitable gifts in the United States are made at the end of the year, when nonprofits send out their annual solicitations for financial help.

"Giving to charity is something Americans do better than anyone else," said Matthew Bishop, U.S. business editor of The Economist and author of "Philanthrocapitalism: How Giving Can Save the World."

"The amount given by ordinary Americans is 10 times what is given by Warren Buffett and Bill Gates," said Bishop. 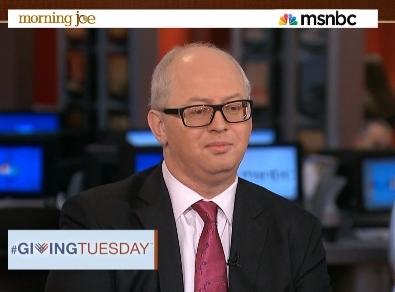 Donation tax deduction issues: Of course, those rich guys and their peers get a lot in return from the tax code for their gifts.

The tax deduction for donations, however, probably doesn't matter that much, according to Bishop.

Bishop said that Buffett, whom the writer interviewed for his book and who probably saves millions each year thanks to the charitable deduction, said that the tax code makes absolutely no difference whatsoever to his giving.

"The deduction really affects those earning above $70,000 and below $250,000," said Bishop. "Evidence shows that it makes a small difference, but not as big a difference as you might think because most people give because they care about a particular cause. The amount of money [donated] may be affected a bit by what your accountant tells you, but generally you're giving because you want to help that local community group or that village in Africa or whatever."

And since most people -- around 60 percent, according to Internal Revenue Service filing figures -- don't itemize, they don't get the benefit of the charitable tax deduction anyway.

Fiscal cliff donation component: Of course, all the tax data in the world, Buffett's assurance he'll give regardless and Bishop's observations on generosity aren't going to keep the philanthropic community from worrying as limits on tax deductions are part of the fiscal cliff discussions.

I expect the nonprofit community to aggressively argue for keeping the charitable deduction in place as is.

Buffett notwithstanding, many nonprofits say they depend on rich donors who are acutely aware of the tax break when they make their giving decisions.

So if there is some limit placed on deductions claimed by wealthier taxpayers, most charities would like to see charitable donations exempted from the cap.

Today, however, regardless of whether the tax break applies to you, #GivingTuesday folks hope you'll make a charitable gift and help the group turn their idea into an annual post-Thanksgiving giving event.