Mother Nature has been seriously ticked off recently and the folks in the Northeast have sure been on the receiving end of her temper.

On the heels of Superstorm nee Hurricane Sandy, a nor'easter blasted, well, the northeast.

And some of the areas that were declared major disasters because of Sandy also were hit by Winter Storm Athena.

Winter storm names: What? You didn't know the northeaster had a name?

Don't worry; you're not too far behind the curve. The naming of winter storms just began this week.

The names are not official christenings from the National Weather Service (NWS). The naming convention is from The Weather Channel (TWC).

So far, the cable television channel has named two winter storms, the nor'easter Athena and Brutus, which just rolled into Montana. 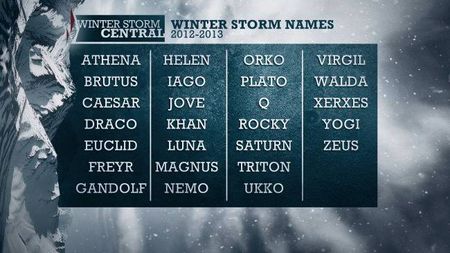 That's an interesting collection. The name that immediately caught my attention was the initial Q.

Is Q for the James Bond spy gadget guru or maybe the Star Trek: Next Generation villain?

Why names winter storms: The name choices aside, why use them at all?

Cynics, and I'm among them, believe it's a rating driven move.

Even one of TWC's sister meteorological sites, the recently acquired Weather Underground, called the storm names a really bad idea.

TWC, however, has several other reasons in support of winter storm names:

We shall see whether the naming sticks.

Meanwhile, the National Weather Service is reiterating that naming winter storms isn't part of its protocol.

In a memo to NWS employees, the federal agency reminds them to "please refrain from using the term Athena [or any other winter storm names] in any of our products." 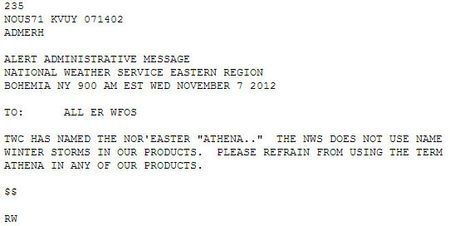 Getting tax help after major storms: Regardless of what a storm system is called, officially or unofficially, when it's a major disaster, victims might be able to get some recovery help from the Internal Revenue Service.

Because of Sandy, this week's Weekly Tax Tip is one you've seen many times before but it's advice that, unfortunately, will be needed as long as Mother Nature stays on the rampage: Get disaster relief from the IRS.

It's not always the easiest process.

You'll need to determine whether to claim the qualifying losses from a major disaster on your filing for the year in which the storm hit or to amend the previous year's return.

This means extra worksheets since you can't simply deduct the full amount of your losses. If you have insurance, you have to take reimbursements from the policy into account, as well as make sure you losses are more than $100.

And if you decide you want to file an amended return so you can get added tax refund money in hand sooner to help pay for repairs, you'll have to fill out and send Form 1040X by hand. The IRS doesn't yet accept e-filed amended returns.

But it could be worth it. And every bit of help, especially from an unexpected source such as the IRS, is welcome when you've gone through a major natural disaster.