Evading taxes apparently is in fashion in Italy.

The designers allegedly avoided Italian taxes when they sold their business in 2004 to a Luxembourg-based holding company, Gado Srl, that tax officials contend they created specifically for tax evasion purposes.

Meanwhile, the fashion houses of Hugo Boss and Valentino also are tax trouble.

Italy's tax police revealed earlier this month that had confiscated $83.5 million worth of land, holdings and real estate, including a 15th century castle. 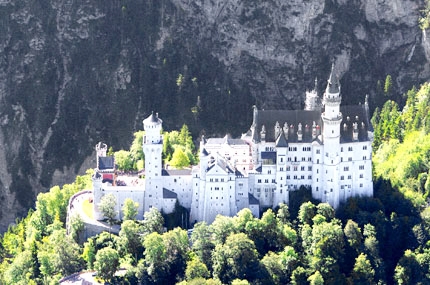 This isn't the castle seized in connection with the Boss/Valentino alleged tax evasion case, but isn't it gorgeous? It's Neuschwanstein Castle in Bavaria. Photo courtesy European Castles Tours.

The assets, say tax officials, are from 13 people "linked to one of Italy's most important families in the fashion and textile sector" and who are reportedly under investigation are suspected of not having filed tax returns.

These two high-profile forays into the allegedly illegal tax dealings of haute couture darlings is the latest effort by Italy to avoid becoming the next Greece. To prevent a similar fiscal meltdown as its Mediterranean neighbor, Italian leaders are looking at ways to catch tax evaders.

For the last few years, Italian officials have been cracking down on yacht owners whom they believe bought the luxury boats with money they didn't report to the national tax office.

And even the Catholic Church, whose independent Vatican City is located within Rome, is not immune to scrutiny by Italian tax officials. They've also explored ways to collect taxes on not the church's vast property holdings that are not directly related to religious endeavors.

Excellent web site. Lots of helpful info here. I'm sending it to several pals ans additionally sharing in delicious. And obviously, thank you on your sweat!

hey!!! i love the uniqueness of your articles there is fun as well as a good topic to discussed keep it up...

Kay, you are always number one on finding interesting articles and events that make tax talk fun! I am an avid reader of your columns on MarketWatch, and I appreciate all your efforts to inform the public so we aren't paying more than our fair share. By the way, I have found it incredibly useful to have within my circle of trusted advisors, a tax person whom I feel comfortable. This is my top lieutenant in that regard, a Westchester-based CPA firm (Paul Herman & Co.) found online at http://hermancpa.com/Firm-Profile. If any readers want to speak to Paul, he is incredibly sincere and knowledgeable.