The two actors, who shared scenes in the upcoming Scary Movie 5 as well as separate troubles with substance abuse, bonded during the movie, according to TMZ. 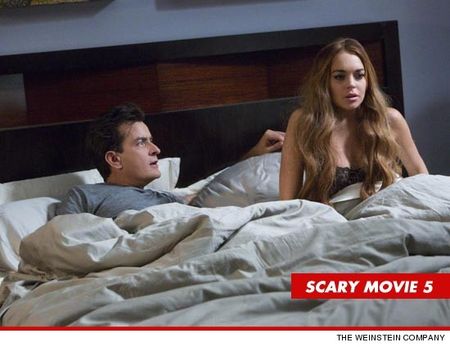 Lindsay and Charlie talked about everything, including at one point Lindsay's ongoing tax problems, reports TMZ.

Estate, gift tax issues: In addition to being a good friend, Sheen apparently is taking the same advice that many wealthy folks get every year.

The typical advice to the rich is to consider lowering possible estate tax effects by giving away some assets while they're still around to get thanks from the recipients.

If you leave the property to be doled out after your demise, your estate's total value could subject it to the estate tax. But by gifting some of your assets, including cash, you can lower the amount of estate that will owe the IRS.

Not that I'm thinking or wishing anything to happen to Charlie Sheen, who once was among the highest paid television actors. But he's already led a hard life. And you never know.

For 2012, estates worth up to $5.12 million are exempt from federal taxation. Above that, the tax rate is 35 percent.

If Congress doesn't act on fiscal cliff and other issues such as the estate tax, in 2013 a federal estate tax rate of 55 percent will apply to estates worth more than $1 million.

So tax advisers usually counsel their rich clients to dole out some of their millions and billions of dollars early.

That means for 2012, Charlie or Warren Buffett or even much poorer you and I, could give to as many individuals as we want gifts of $13,000.

And married couples get to double up. A husband and wife can separately give gifts valued up to $13,000 to the same person without making a taxable gift.

And as long as we kept the gifts at or below the annual limit, we givers wouldn't have to file an annual taxable gift report with the IRS either.

But give more than the gift maximum, and the IRS expects to learn about it.

You must file Form 709, United States Gift (and Generation-Skipping Transfer) Tax Return, for the tax year in which the gift is made.

Lifetime unified credit: Does that mean that Charlie will owe a 35 percent tax (the same as the estate tax rate) on the $87,000 he gave Lindsay in excess of the $13,000 gift limit this year?

In giving away part of your estate, you also have to take into account the unified credit. This tax provision is so named because the federal gift tax and estate tax are integrated into one unified tax system.

That essentially means that you can give away parts of your estate now, up to the estate tax limits (currently the $5.12 million mentioned earlier), to offset the estate tax that might apply when you do shuffle off this mortal coil.

When you give more than the annual gift tax exclusion in a year, you can either pay the gift tax on the excess or take advantage of the unified credit to avoid paying the tax in the year you were extra generous to friends and family. You'll file Form 709 here, too, so that you and Uncle Sam will have a running lifetime total of your used exclusion amount.

If you opt to pay the tax, the taxed gifts are added back to your estate, and the estate tax is recalculated, with the gift taxes you previously paid credited against any future final estate tax bill.

Of course, it's impossible to know what the estate tax might look like when your time arrives. The estate tax issue has taken a back seat to other tax and financial concerns.

But most tax watchers think it's only going to go up, at least in the near term. That possibility is why estate tax watchers are referring to 2012 as the year of the gift tax.

So it looks like Charlie Sheen not only helped out Lindsay Lohan (and the IRS), but also managed to take care of a little bit of estate planning for himself.

I wanted to thank you for this great read!! I absolutely loved every little bit of it. I have you book-marked to look at new stuff you post…

Good day! This is my 1st comment here so I just wanted to give a quick shout out and say I genuinely enjoy reading your articles. Can you recommend any other blogs/websites/forums that deal with the same subjects? Thanks a ton!