Outside groups spent more than $1.3 billion on the just completed 2012 elections. More than $715 million went to defeat President Obama and Democratic Senate candidates.

Two more Democrats will join the Senate in January.

And in the House, where the leftover super PAC money went to try to bolster the Republican majority in that legislative chamber, the GOP retained control but actually lost a few seats.

So did the outside money not matter? Or was it simply poorly spent?

You can be sure that the folks who ponied up the really big bucks to the Republican super PACs are asking the same questions.

Even some of those who didn't give to the special interest groups are skeptical about the amount of outside dollars spent promoting or attacking candidates and causes in the 2012 races.

Finally making a modicum of sense: One such dubious PAC observer is the jackass provocateur jackass Donald Trump, who for some reason got overly political in 2012.

I never thought I'd find anything the New York loudmouth had to say worthwhile, much less worth repeating, but it's been that kind of election year.

And tRump nailed it when, via Twitter, he called out Karl Rove and his Crossroads GPS group the day after the election: 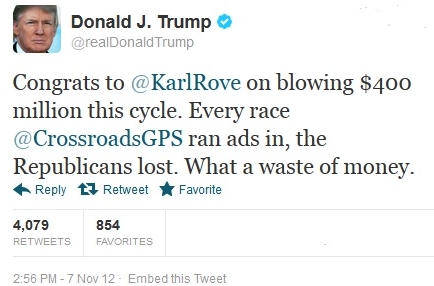 Adding up the election outlays: The Sunlight Foundation, a nonprofit government watchdog group that advocates greater transparency in politics, has compiled a list of spending by outside groups this election.

The numbers are mindboggling and for donors, especially to Republican and/or conservative super PACs, not pretty.

The associated Crossroads Grassroots Policy Strategies, usually shortened to Crossroads GPS as the Donald did, didn't fare much better. That group spent almost $71 million and it also didn't back any election-night winners. 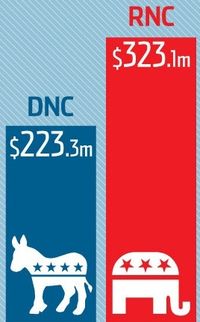 Overall, more than $6 billion from all sources was spent during this election cycle.

In addition to the regular and super PAC money, the two major national political parties also spent millions on behalf of their candidates.

As that graphic at left, excerpted from the larger and quite interesting infographic by BestDegreesProgram.org via Fast Company about money collected and spent this election year, shows that the Democratic National Committee spent $223.3 million. Its counterpart Republican National Committee shelled out $323.1 million.

And Barack Obama and Mitt Romney weren't slouches when it came to raising money directly for their campaigns.

Will all the money spent this year be what it takes to get a grip on campaign spending?

More importantly, will this financial excess be what it takes to finally get rid of the effects of the Supreme Court's ruling in the Citizens United case that opened this floodgate of political funds?

It's possible that the case could again come before a repositioned high court after Obama names his third justice. After all, the Citizens United decision two years ago was 5-to-4.

Or Americans could force a Constitutional amendment to overturn the ruling.

Amending the Constitution is not something to be done lightly. But as this election demonstrated, neither is using out-of-control special interest money to elect our officials.