As I drove my mother home after Thanksgiving, I wanted to kick myself for not stopping first at the Shell station near my home to fill up. 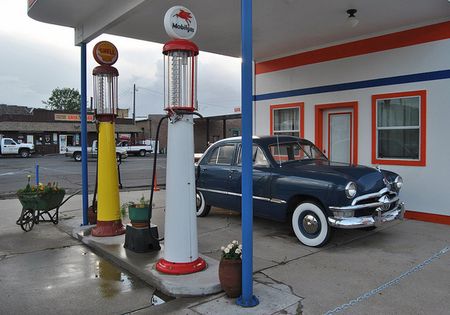 I had plenty of fuel to make it the 50 miles. But I should have topped off to take advantage of the station's regular gas that was going for $3.09 a gallon.

I felt increasingly stupid as we sped past gas station after gas station with signs announcing $3.12 then $3.15 then $3.19 per gallon prices.

Then I drove into her small Central Texas town and there it was. Gas for $3.06 a gallon.

I didn't feel as fuelish as I filled my then three-quarter empty tank with the cheapest gas I'd seen in months. In fact, I felt quite smug, even though it was dumb luck that led me to my refueling bargain.

Even though my mother would like me to visit her more, I'm not going to make extra 100-mile round-trips to save a few fill-up pennies.

But I might be doing a bit more searching for bargain gas if one fiscal cliff proposal goes anywhere.

Gas tax increase suggested: Some folks say it's time that the federal gasoline tax, which has been at 18.4 cents per gallon has not gone up since 1993, be increased as part of any plan to deal with the impending expiration of the Bush-era tax cuts and coming budget sequestration.

Nineteen years ago, the gas tax hike was 4.3 cents and none of that increase was credited to the Highway Trust Fund. The added collection went entirely toward deficit reduction. The same should happen now, gas-tax-hike advocates say.

But with the Taxpayer Relief Act of 1997, signed into law by President Bill Clinton on Aug. 5 of that year, the 4.3 cent general fund gas tax increase was redirected to the Highway Trust Fund, which helps pay for road construction and improvement.

That's where we are now.

The right time? The idea of hiking the federal gasoline tax comes up now and then. So do proposals to suspend it, especially when gas prices are rising and it's an election year.

"Anybody in the transportation community's been talking about a need to raise the fuel tax for many years now," Bill Graves, head of the American Trucking Association, told the Wall Street Journal. "No one [in Congress] wants to publicly acknowledge it, no one wants to publicly go there. But privately they all they get it."

Graves is right. So far, no Representatives or Senators have come out in support of a gas tax increase.

But the idea was taken for a test drive in other recent tax reform discussions.

The National Commission on Fiscal Responsibility and Reform recommended a 15 cent-a-gallon gas tax hike in its draft report (page 24). The full tax reform proposal never made it past the preliminary stage because it failed to get a majority OK from its bipartisan members.

But while the panel was working, Sens. Tom Carper (D-Del.) and George Voinovich (R-Ohio) suggested the commission -- you probably know it by its more popular name, Simpson-Bowles -- increase the gas tax to 25 cents per gallon. The duo's additional 10 cents a gallon would have gone toward federal debt reduction.

A difficult tax road: Given the history of attempts to raise the gas, or any other, tax it might seem like a no-chance-in-highway-hell of getting Congress to agree to hike a tax on a product most Americans depend on every day.

And it looks like an especially hard sale as gasoline prices, which hit record levels earlier this year, are poised to reach their highest average price for a given year in a few weeks.

"Gas prices in 2012 are likely to be the most expensive ever on an annual basis," Michael Green of the AAA told MarketWatch.

But lawmakers on Capitol Hill are scrambling for ways to cut a deal before we roar off the fiscal cliff.

Hiking the gas tax could be appealing because policy makers know that while it will hurt folks who depend on their cars for work, we'll still pay what we have to because, as noted, most of us depend on autos to get to and/or do our jobs.

And they also can argue that the federal gas tax is only one part of the calculation when it comes to the price of gasoline. Other state excise taxes and fees add up at pump.

So a federal gas tax increase might just have a chance of approval this time.