You know it's a wacky election year when folks from disparate parts of the political world start seeing things the same way.

Bill Kristol, editor of the neocon Weekly Standard, agrees with my assessment from almost a year and half ago that the Republican Party needs to know when to learn out to declare victory and run with it.

The newly reelected President Obama has said he's willing to work on changes to some federal domestic programs, known as entitlements in the spending hawks' dictionary, but that for his part he wants the top two Bush income tax rates to go up as scheduled on Jan. 1, 2013.

Republicans are digging in their heels, just as they did in mid-2011 during the debt ceiling debate.

This time, though, Kristol and some other members of the loyal opposition are saying it is time to really compromise on a way to avoid falling off the fiscal cliff. 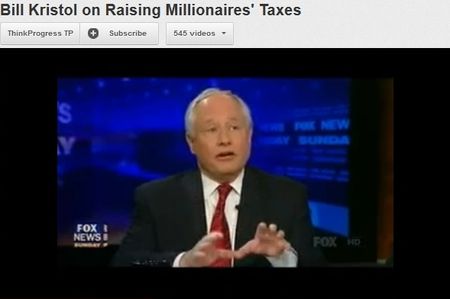 "It won't kill the country if we raise taxes a little bit on millionaires," Kristol said on "Fox News Sunday, Nov. 11.

"It really won't, I don't think. I don't really understand why Republicans don't take Obama's offer. ... Really? The Republican Party is going to fall on its sword to defend a bunch of millionaires, half of whom voted Democratic and half of whom live in Hollywood and are hostile?"

If such resistance to any type of compromise continues, then GOP won't stand for Grand Old Party but for Greedy Old Party.

And the overall economy and all taxpayers will pay price.

New situation, same old tax battle formation: During the debt ceiling fight I was astonished at the GOP's unwillingness to take a sweetheart offer from the president and Democrats who grudgingly agreed to keep the Bush income tax rates in place and accept a roughly 3-to-1 rate of spending cuts to revenue increases.

Of course, that summer the GOP was still reveling in expansion of its House majority thanks to Tea Party candidates' success in the November 2010 elections.

But now things are different.

Despite protestations from Republicans on the Capitol Hill and their apologists at Fox News et al, Obama did get a mandate. His victory was based on a campaign platform that included raising the current 33 percent and 35 percent income tax rates to 36 percent and 39.6 percent, respectively.

In addition to agreeing with the president by voting for him, citizens told exit pollsters that they think taxes should be raised on the wealthy. That's the same tax message the public has been sending for more than a year.

Obama is taking his and the majority of voters' fair tax share message back to the public, meeting this week with labor and business leaders to discuss ways to put up a permanent guardrail on the fiscal cliff.

We'll see if this coalition can get the Republican leadership to reassess its definition of compromise, work with the White House and join the economic work crew.