What effect might the fiscal cliff have on your taxes? Run the numbers!

Those numbers geeks at the Tax Policy Center are at it again.

They've come up with a fiscal cliff tax calculator (based on the version created back in the 2010 lame duck session when the Bush-era tax cuts were first set to expire) that gives us an idea of what our taxes might be depending on what happens with Congress and the president between now and the end of the year.

Since there are so many options floating around Capitol Hill on how to deal with this impending fiscal fall, TPC has given us several options to mull over.

We can compare four alternative tax policies to see how we might make out taxwise next year if:

Of course, every taxpayer is unique. So in addition to the six taxpayer scenarios TPC has devised as starting points ... 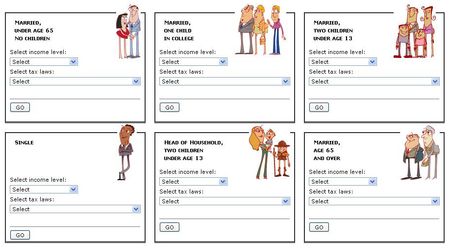 I love those illustrations! Click for a larger view.

... you can create your own custom filing specifics and run those numbers.

One more "of course" -- TPC points out that the results from its fiscal cliff tax calculator are just estimates. For ease of use, says TPC, many items that would be included on actual tax returns are omitted.

And while I'm sure all y'all know this, TPC points out the calcualtor is not a tax preparation tool. It wouldn't be one even if we knew what form a final fiscal cliff deal might take.

But it is a fun Friday exercise for tax geeks, so enjoy!