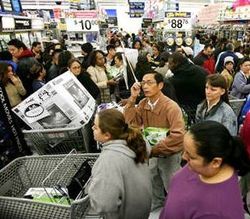 Have you finished your Black Friday shopping?

My mother and I -- at her insistence, I must make clear -- will run out to pick up a few things later this afternoon.

Unlike the crazy sheep most shoppers today, we're not looking for bargains or buying Christmas gifts.  I understand both of those goals, but I still don't understand why every person must go searching for them on one day.

Seasonal staffing time: Chances are good that as thousands us head to our local stores between now and the end of the year we will be helped by seasonal employees.

Kohl's, Amazon and Wal-Mart have added more than 50,000 employees nationwide to help them through the giving -- and buying -- season.

UPS is even offering $150 bonuses to current employees who refer holiday help that is hired to work at the delivery service's air hub at Louisville International Airport. If the temporary UPS staffers stay through Dec. 31, they also each get an added $150.

The National Retail Federation estimates that in total retailers will hire between 585,000 and 625,000 seasonal workers this holiday season. That's comparable to the 607,500 seasonal employees hired last year.

In most cases, especially with big chain stores, the short-term workers are indeed employees. But some businesses like to hire contractors, both as holiday help and beyond.

The employment designation could make a big tax difference, both to the businesses and the temporary personnel. And the tax considerations of employees vs. contractors are covered in this week's Weekly Tax Tip.

If you are hired as an independent contractor instead of an employee and aren't aware of exactly what the classification means, you could face some tax troubles at filing time.

What's the difference? Although you might do essentially the same work, the Internal Revenue Service views contractors and employees, and the companies that hire them, differently.

Determining whether the person providing the service is an employee or an independent contractor is based primarily on the degree of control and independence over the work.

If it's the boss who's fully in charge, then you're probably an employee. If you have most of the control, including when and how you do the job, then you're the boss as an independent contractor.

That absence of withholding taxes means the worker, as a contractor, must pay his or her income taxes, as well as both the employer and employee Social Security and Medicare taxes. Those payments are reported and reconciled on Schedule SE, which you'll send in along with the Schedule C that's part of your overall Form 1040 filing.

In order to avoid owing all those self-employment taxes in one big lump at tax return time, as a contractor you need to file quarterly estimated tax payments. If you don't, you'll probably face some added charges for not paying the taxes on the money when you earned it.

Remember these added tax filing and payment responsibilities when you're offered a job on a contract basis. While it might be tempting to get contractor money that doesn't have any taxes taken out, you'll end up paying Uncle Sam eventually.

So make sure you know how you're carried on the company payroll -- and that the designation is correct -- when you are hired. That way you can make tax plans accordingly.

That is interesting about contractors (mississauga) and employees. Thanks for sharing.

This is a good model for contractors to follow. We've been implementing this in Burr Ridge IL for months now and its been very beneficial.

Wow, I am so glad I came across this. I am looking into doing summer sales this summer. If I'm not careful I will have a lot to pay in taxes. I wonder what its like being a contractor in Mississauga. http://www.patcon-contracting.net/en/

I see the greatest contents on your blog and I absolutely love reading them.