Taxes discussed, sort of, in the second presidential debate

The good news was that we finally got some tax talk last night during the second presidential debate between President Obama and Mitt Romney. 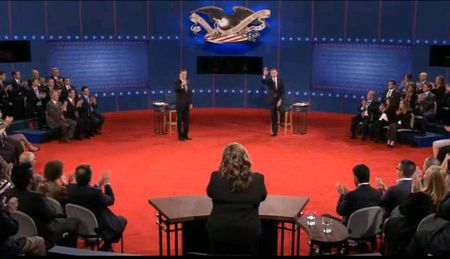 The bad news was that we didn't get much more at the Hofstra University town hall session than what's already been offered, such as in this comparison of the Obama and Romney tax plans.

But the two candidates did talk a bit of taxes.

Here are some tax excerpts taken from the debate transcript.

You can make a lot of money and pay lower tax rates than somebody who makes a lot less. You can ship jobs overseas and get tax breaks for it. You can invest in a company, bankrupt it, lay off the workers, strip away their pensions, and you still make money."

One of the town hall attendees had a question for Romney about his plan to lower all individual income tax rates and make up that lost revenue by eliminating deductions.

Romney told the audience that he wants to bring the rates down, to simplify the tax code and to get middle-income taxpayers to have lower taxes.

"Now, how about deductions? Because I'm going to bring rates down across the board for everybody, but I'm going to limit deductions and exemptions and credits, particularly for people at the high end, because I am not going to have people at the high end pay less than they're paying now," Romney said. "The top 5 percent of taxpayers will continue to pay 60 percent of the income tax the nation collects. So that'll stay the same. Middle-income people are going to get a tax break."

He also revisited his proposals to limit deductions, which when Romney first mentioned this idea started at $17,000 mentioned by Romney before the first debate and then increased during that Denver event to as much as  $50,000. Last night on Long Island, N.Y., Romney chose to emphasize a middle amount.

"And so, in terms of bringing down deductions, one way of doing that would be say everybody gets -- I'll pick a number -- $25,000 of deductions and credits, and you can decide which ones to use. Your home mortgage interest deduction, charity, child tax credit, and so forth, you can use those as part of filling that bucket, if you will, of deductions."

That would, Romney said allow an individual's rate to be lowered and "the burden also comes down on you for one more reason, and that is every middle-income taxpayer no longer will pay any tax on interest, dividends or capital gains. No tax on your savings. That makes life a lot easier."

In response, Obama reminded the group of undecided voters of the tax cuts for middle-class families and small businesses that were enacted during his first term. And he took the opportunity to tie taxes to federal deficit concerns.

"But what I've also said is if we're serious about reducing the deficit, if this is genuinely a moral obligation to the next generation, then in addition to some tough spending cuts, we've also got to make sure that the wealthy do a little bit more," Obama said.

"So what I've said is, your first $250,000.00 worth of income, no change. And that means 98 percent of American families, 97 percent of small businesses, they will not see a tax increase. I'm ready to sign that bill right now. The only reason it's not happening is because Governor Romney's allies in Congress have held the 98 percent hostage because they want tax breaks for the top 2 percent," he said.

As for those earning more than $250,000, Obama noted that his plan calls for a return to the tax rates we had when Bill Clinton was president. "We created 23 million new jobs. That's part of what took us from deficits to surplus. It will be good for our economy and it will be good for job creation," he said.

He also attacked the GOP contention that lower rates on the wealthy create jobs.

But, you should pay attention to this campaign, because Governor Romney has made some commitments as well. And I suspect he'll keep those too. You know when members of the Republican Congress say, "We're going to sign a no tax pledge, so that we don't ask a dime for millionaires and billionaires to reduce our deficit so we can still invest in education, and helping kids go to college. He said, "Me too."

And the president slammed Romney for not pointing out which deductions, which loopholes he would close.

"The fact that he only has to pay 14 percent on his taxes when a lot of you are paying much higher. He's already taken that off the board, capital gains are going to continue to be at a low rate so we -- we're not going to get money that way," said Obama. "We haven't heard from the governor any specifics beyond Big Bird and eliminating funding for Planned Parenthood in terms of how he pays for that."

The president argued that Romney's proposal so far would pay for only a 4 percent reduction in tax rates. To get a larger rate cut, he said, "You're going to be paying for it. You're going to lose some deductions, and you can't buy the sales pitch. Nobody who's looked at it that's serious, actually believes it adds up."

Romney, of course, disagreed. But he offered no specifics.

And while both men agreed that the U.S. corporate tax tare is too high, Obama also took advantage of the corporate tax discussion to slam tax breaks for overseas investments.

This was the last chance in a debate setting to hear both Obama and Romney talk taxes. The next encounter will focus on foreign policy.

Was this enough to make you feel comfortable with either candidate's tax position? Did last night debate change your mind or help you make up your mind?

As a former tax professional, I still can't figure out Romney's tax plan. If you lower the tax rates and take away deductions so that there is no effect on revenue, what was the point? Either everyone still pays the same (so why would that have an effect on the economy or deficit?) or someone pays more and someone pays less.

Now, a fact that is probably too complicated to explain in a debate format, is that high-income taxpayers already have much of their deductions phased out--the higher the AGI, the more the phase out. So for some very high-income tax payers, they aren't getting much benefit of deductions anyway.

So if, as Romney says, he's not going to lower taxes on the wealthy, I suspect he's lying. He claims he will lower their rate and take away their deductions--but there are not much in the way of deductions to take away since they are already mostly phased out for these taxpayers. Seems like they are going to score big time under his plan.

And at the worst, it doesn't seem possible to make it revenue neutral, especially without increasing the burden on someone else. Who might that someone else be?