In June, the U.S. Supreme Court decided that health care reform law, popularly known (even among Democrats) as Obamacare, was constitutional. That split decision hinged on the law's controversial tax component -- the money that the Internal Revenue Service eventually will collect from the uninsured.

On Thursday, Oct. 18, a federal appeals court has ruled for a widow fighting the Defense of Marriage Act (DOMA) because its restrictions caused her to pay more in estate taxes after her wife died than a surviving spouse in a heterosexual marriage would have owed. 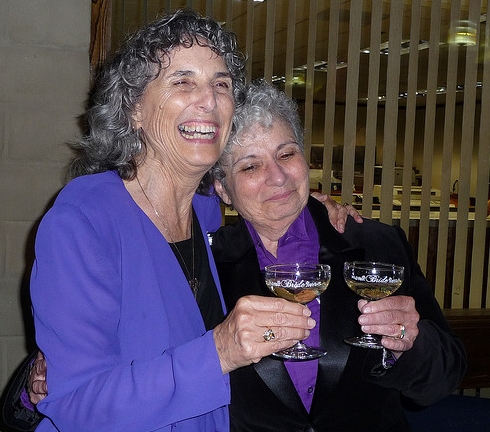 Ellen and Shelly -- who aren't involved in a DOMA lawsuit -- after their 2008 wedding vows. Photo courtesy basykes via Flickr.

This latest DOMA decision follows another federal appeals court ruling, also in June, that Uncle Sam had no basis for denying benefits to same-sex married couples. Tax filing limitations imposed on same-sax couples was part of the earlier case's argument.

Estate taxes at issue: The case decided this week was brought by Edith Windsor against the federal government in 2010 following the death of her spouse, Thea Spyer, in 2009.

Windsor and Spyer, who were legally married in 2007 -- the ceremony was in Toronto, but was recognized by New York where they lived -- had been together, married and unmarried, for a total of 44 years.

But after Spyer's death, Windsor had to pay federal estate taxes of $363,053 because DOMA prevents the IRS from recognizing Windsor as a surviving spouse. If Spyer had been married to a man, her estate would have passed tax-free to her spouse.

The three-judge Second U.S. Court of Appeals in New York found that DOMA was an "unprecedented intrusion" into an area of traditional state regulation.

In writing the majority opinion written in Windsor v. United States, Judge Dennis Jacobs of said there was no reason that DOMA could be used to deny benefits to gay couples married in states that allow such unions.

In addition to finding that DOMA violated the Constitutional guarantee of equal protection under the law, the court said that laws singling out gays and lesbians should receive heightened scrutiny by the courts; that is, government discrimination against gays would be assumed to be unconstitutional.

"In this case, all four factors justify heightened scrutiny: A) homosexuals as a group have historically endured persecution and discrimination; B) homosexuality has no relation to aptitude or ability to contribute to society; C) homosexuals are a discernible group with non-obvious distinguishing characteristics, especially in the subset of those who enter same-sex marriages; and D) the class remains a politically weakened minority."

While the court's ruling is a victory for opponents of the marriage act, the final word likely will come from the Supreme Court.

Along with the Windsor/Spyer and Boston rulings against DOMA, one from the Ninth Circuit overturning California's ban on same-sex marriage also could be considered by the country's highest court.

As a tax geek, I'm hoping one or both of the tax cases make it before the nine justices.