OK, folks, pull out your Schedule A and let's look at what tax deductions we can eliminate.

But note, you can't touch the mortgage interest deduction for a principal residence or the write-off for charitable gifts.

No, that's not the eternal wishes of lobbyists for the housing and philanthropy sectors.

Tax plan in flux: The Republican presidential nominee is making the rounds, dropping hints about his tax plan.

Although his campaign website still simply says the Republican presidential nominee would "make permanent, across-the-board 20 percent cut in [the existing six] marginal rates," he has hinted at the possibility of doing away with some tax deductions.

At one campaign stop during the GOP primaries, he was overheard putting the mortgage interest and property tax deductions for second homes on the block.

Then just before his first debate with President Obama, Romney told a Denver TV station that he'd like to limit itemized deductions to, say, $17,000.

Two days later during the debate, Romney upped the possible Schedule A limit to as much as $50,000.

And he's recently again mentioned the possibility of doing away with specific deductions.

That has made not only industry groups, but many taxpayers nervous. Well some of us can rest a bit easier.

"The home mortgage interest deduction and charitable contributions, there will of course continue to be preferences for those types of expenses," Romney today told CNN's Wolf Blitzer. 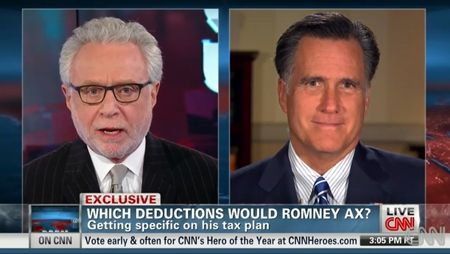 Are the deductions entirely safe? But ... C'mon. You knew there was a but coming.

Not to get too picky, but that is sort of my job, and it seems like Romney left himself some wiggle room here.

He didn't say the mortgage interest and charitable gift deductions would remain just as they are. He said there would still be "preferences" for them.

Just spit-balling here, but since Romney again reiterated in that same Situation Room interview that he would limit deductions "particularly for people at the high end" of the income scale, it looks like some of Mitt's personal wealth peers might not get as much Schedule A bang for the tax buck as they currently do.

But would limiting some mortgage interest and charitable deductions be enough to make his tax plan revenue neutral as he insists it will be? Not many people outside the Romney campaign think so.

So what else could Romney remove from Schedule A that would raise some tax money to pay for lowering rates 20 percent across the board?

Medical and dental expenses: The form starts with medical expenses. These already have been hard to claim. This tax year, you must accumulate more than 7.5 percent of your adjusted gross income in medical and dental costs before you can claim them.

In 2013, that percentage threshold hurdle goes up a few notches to 10 percent for most filers thanks to the Patient Protection and Affordable Care Act, or Obamacare as it's popularly known.

Taxes you paid: In this section we have deductions for state and local income taxes or state and local sales taxes. Of course, the sales tax deduction actually has expired, although several lawmakers are urging that this be reauthorized as part of any tax extenders bill.

There's also the deduction for real estate taxes. Under current law, you can claim the property taxes you pay for every home you own, not just your main residence and a vacation/second home.

And you can deduct personal property taxes, such as levies on the value of your car, that you pay.

Interest you paid: Here's where we find mortgage interest deductions, which Romney says would remain at least in some form.

Although in keeping with his high-end earners comment to Blitzer, Romney was overheard at a closed April fundraiser saying said he would eliminate the tax deduction for interest on mortgages for second homes.

So is investment interest. This is money you pay for a loan you took out for investment purposes. Given Romney's personal situation of making most of his money through investments, I'd wager that this would continue to be a safe deduction.

Gifts to charity: This section would remain, according to Romney.

Of course, it already has some limits. In most cases you can't deduct in one year donations that are more than 50 percent of your adjusted gross income.

Casualty and theft losses: This section is where folks can claim a deduction for at least a portion of the losses they've suffered due to theft, burglary, vandalism, fire, storms (including major disasters), vehicular accidents and in some cases corrosive drywall.

It would be pretty heartless to take away this tax deduction, but if it's for other tax breaks it might go.

Miscellaneous deductions: The catch-all section of Schedule A is home to a variety of deductions, including unreimbursed employee expenses and those incurred during a job search (initiated perhaps because you were never being paid back for all your old job's out-of-pocket expenses!).

Membership in professional organizations can be counted here. So can, notes the form, union dues. That one might be enough for anti-labor folks to argue for this whole section's removal from Schedule A.

Of course, these also are limited anyway to the amounts that exceed 2 percent of your AGI.

Other miscellaneous deductions: This final section of expenses on Schedule A generally is used by folks who lost money while gambling.

You also can claim here a variety of very specific items, such as (but not limited to) casualty and theft losses on income-producing property, losses from other activities from Schedule K-1 and impairment-related work expenses of a disabled person.

OK, as I mentioned at the top of this post, which ones would you say could go?

Feel free to send your ideas to the Romney campaign.