Tax relief for Hurricane Isaac victims in Louisiana and Mississippi

Hurricane Isaac wasn't the biggest, baddest storm to strike the United States, but he still did a heck of a lot of damage.

Even college football games and the accompanying tourism money from traveling fans was lost as several gridiron contests were rescheduled because of Isaac's rain and winds.

And let's not forget the Tampa area, which sustained some economic losses when the Republican National Convention was forced to err on the side of caution and drop a day of its activities when it looked like Isaac might land in that area.

Last and most definitely not least, there are the thousands of individual taxpayers who dealt (and are still dealing) with Isaac's wrath.

While the Internal Revenue Service can't do anything about out of work individuals or damaged park land or who hikes the pigskin when or where, it can offer some tax relief to folks facing various tax deadlines.

It's done that for taxpayers in Louisiana and Mississippi. 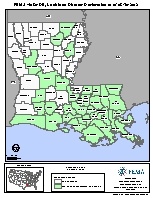 This includes the quarterly estimated tax payment due Monday, Sept. 17.

Who's affected: OK, as promised, now to just which Louisiana and Mississippi residents get this tax relief. 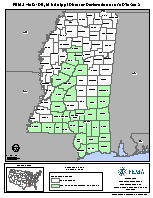 The president also has declared as major disaster areas the Mississippi counties of Adams, Amite, Clarke, Forrest, George, Hancock, Harrison, Hinds, Jackson, Lincoln, Marion, Pearl River, Pike, Stone, Walthall, Warren and Wilkinson a federal disaster area. Individuals who reside or have a business in these counties may qualify for tax relief. (Click the Mississippi image to get a bigger view of these counties.)

If you or your company is in one of these counties and you get a late-filing penalty notice from the IRS, call the telephone number on the notice to have the IRS abate any interest and penalties.

And how does the IRS know you're eligible for the extended deadlines? The agency says it automatically identifies taxpayers located in covered disaster areas and applies automatic filing and payment relief.

But nobody, or in this case no agency, is perfect.

If you should get the special Isaac tax relief and don't, let the IRS know.

The same goes for taxpayers who don't live in or don't own a business in the disaster areas but who have nonetheless been affected by the storm. The IRS will consider granting the relief on a case-by-case basis if you call the agency's toll-free disaster hotline at 1-866-562-5227 to explain why you and/or your company qualify.

You can deduct casualty losses from a presidentially declared disaster in the year in which it actually occurred. In this case, that's your 2012 Form 1040 due April 15, 2013.

Or you can file an amended return for the previous tax year and make the claims then. In this case, that's the 2011 tax year.

For filers who got an extension to file, you don't have to file an amended return if you want to make the loss claims on your 2011 taxes. Just do so on that return, which is due by Oct. 15.

You'll need to run the numbers to see which filing year claim will save you more tax money. But it's worth it, especially if you need the money now to make repairs rather than waiting until next year.

Tracking disasters: When Mother Nature whacks you hard, you can see if your area is eligible for tax relief by checking the IRS' special Tax Relief in Disaster Situations Web page.

The Federal Emergency Management Agency (FEMA) also posts details on disaster areas. Rather than just one big running list of disasters (which was kind of depressing to look at), FEMA's new design allows (or forces) you to search by state, disaster type and/or disaster declaration.