Right now I'm betting that a lot of Republicans are wishing Mitt Romney would just put a sock in it.

While campaigning in Ohio, a state both sides say is crucial to winning the White House, Romney on Wednesday undercut one of the GOP's key arguments, that Obama has spent much of his term raising middle class taxes.

Not so, according to Romney.

"I admit this, [President Obama] has one thing he did not do in his first four years — he's said he's going to do in the next four years, which is to raise taxes," Romney told a crowd in Ohio on Wednesday. 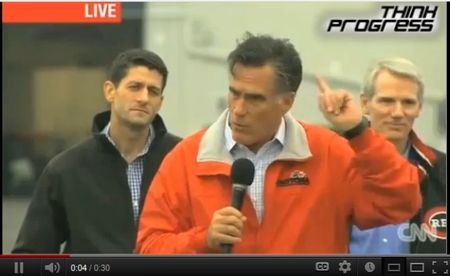 The pained, confused look on the face of Paul Ryan, Romney's running mate, sums up what a lot of Republicans felt at hearing the no Obama taxes comment.

That statement, of course, is quite different from what Romney espoused in the GOP primaries.

Back in January, Romney campaign spokeswoman Andrea Saul told the Los Angeles Times that "President Obama has raised taxes 19 times, stunting our economic growth and leading us further down the path toward a European-style entitlement society."

Just in case you're interested, Politifact looked at the earlier assertion and found Romney's count of 19 tax increases bit exaggerated.

And while it's not yet in effect, the GOP jumped on a Congressional Budget Office report last week that says six million people will be forced to pay the health care mandated insurance coverage tax, two million more taxpayers than originally projected.

Soon after Romney's Ohio remarks, campaign spokeswoman Amanda Henneberg said in a statement, "President Obama has raised taxes on millions of middle-class Americans during his first term in office. Governor Romney was clearly communicating about an additional tax increase President Obama is proposing on American small businesses that will jeopardize over 700,000 jobs."

OK. Thanks for clearing that up.

Tax foot in mouth, take two: Now do you want to elaborate on this Romney tax statement?

At another Ohio stop this morning, Romney told small business owners that if he's elected, "don't be expecting a huge cut in taxes."

Really, Mitt? Are you trying to put Reince Priebus in intensive care?

In listing his goals for a group of Westerville, Ohio, voters, Romney said:

"I'm going to champion small business. Small business, where jobs come from. And let me tell you how to do that. One, as [Ohio Republican] Sen. [Rob] Portman said, we've got to reform our tax system. Look, small businesses typically pay tax at the individual tax rate. And so, our individual income taxes are ones I want to reform, make them simpler. I want to bring the rates down. By the way, don't be expecting a huge cut in taxes, because I’m also going to lower deductions and exemptions. But by bringing rates down, we'll be able to let small businesses keep more of their money, so they can hire more people."

Let's look closely at this statement.

We're still waiting for the campaign clarification on this.

Earlier tax deduction elimination talk: But Romney's statement today was in keeping with what he told a national television audience on Sunday night.

In talking with CBS' Scott Pelley on 60 Minutes, Romney warned America that "lest people think there's going to be a huge reduction in the taxes they owe, that's really not the case because we're also going to limit deductions particularly for people at the high end."

Uh, Mitt. Those people at the high end of the tax scale, they're your people. They are among your most reliable supporters. And I'm sure they were not too thrilled to hear that your plan to lower all tax rates by 20 percent will require that they give up some of their current tax breaks.

Of course, this isn't the first time Romney has hinted that his near peers (and I use the word near because really, who's anywhere close to the amount of money he makes?) might take a tax hit under his administration.

Romney was overheard at a closed April fundraiser saying said he would eliminate the tax deduction for interest on mortgages for second homes. He also said he might consider doing away with state and property tax deductions for the wealthy.

And the GOP thought the worst of it was Romney's comments, secrectly taped at another private fundraiser, about 47 percent of Americans seeing themselves as victims entitled to government assistance.