47 percent don't pay federal income taxes, but do hand over payroll, other taxes

Just in case you were otherwise occupied yesterday and missed it, below is the videotape of Republican presidential nominee Mitt Romney writing off 47 percent of the electorate. Those Americans, Romney told a group of potential donors, won't vote for him because they're getting a sweet, nontaxpaying deal under President Obama.

"My job is not to worry about those people," Mitt Romney said of the 47 percent of Americans who, according to a tax think tank study, did not pay federal income taxes in 2011. "I'll never convince them they should take personal responsibility and care for their lives."

After the surreptitiously recorded video, first reported by Mother Jones magazine, hit the Internet and airwaves, Romney tried to explain his comments as just part of the political process, the process of campaigns.

"I want to keep my team strong and motivated and I want to get those people in the middle and that's something that fundraising people who are parting with their money are very interested in, knowing can you win or not, and that's what this was addressing," Romney explained in a press conference Monday night.

OK, whatever it takes to get the big checks. I get it. I lived in the D.C. area for almost 20 years, working for part of that time for a guy who faced re-election. And the folks forking over the dollars are big boys and girls. They know they'll be told what they want to hear.

Not the full story: I also understand frustration with folks who don't pull their weight. Nobody likes freeloaders.

Everyone of us has had a friend or relative who was inordinately dependent on our goodwill until we eventually got tired of it.

But this continual semi-national outrage over a perceived huge, lazy, entitlement seeking, no-tax-paying segment of America is disingenuous.

Romney and those citing the various percentages of nontaxpayers are forgetting some details.

First the key fact. There are indeed a large number of Americans who each year don't pay any federal income tax.

The latest figure is not quite the 47 percent cited by Romney, but instead 46.4 percent

That figure came from a July 2011 study, "Why Some Tax Units Pay No Income Tax," by the Tax Policy Center (TPC), a Washington, D.C.-based partnership of the Urban Institute and the Brookings Institution.

Definition digression: TPC says a tax unit is an individual, or a married couple who file a tax return jointly, along with all dependents of that individual or married couple.

But Romney and others stopped at that 46-to-47 percent amount.

Plenty of other taxes: They conveniently ignore that while these folks might not pay federal income taxes, many of them did pay other taxes, most notably payroll taxes.

More than 28 percent of those who didn't pay income taxes still handed over money to Uncle Sam via payroll taxes, the paycheck withholding amounts that fund Social Security and Medicare.

As the payroll tax's name indicates, these folks were on a payroll, working, not sitting at home with a beer in one hand and in their other the remote to the big-screen HD TVs that they bought with welfare checks.

The jobs they had, however, didn't pay enough for them to owe, after they claimed their deductions and any tax breaks for which they qualified, any federal income taxes.

No taxes at all: That then leaves just slightly more than 17 percent of Americans (or tax units in the TPC vernacular) in 2011 who escaped both federal income and payroll taxes.

Who are these people who, in Romney's words, "are dependent upon government … [and] believe they are victims?"

They primarily are elderly people living on Social Security, a system they had to pay into in order to receive benefits, and younger individuals who are making less than $20,000 a year. 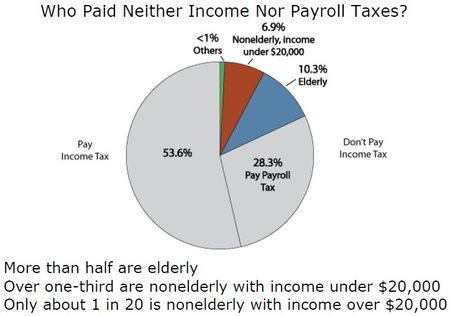 And, oh yeah, less than 1 percent of no-tax-at-all group falls into the "other" category. Some of those nonpayers are likely at the other end of the income spectrum.

IRS data show that a handful of high-income households manage to owe no income tax some years. In those cases, they get their income from tax-exempt bonds or from overseas sources <<cough - Romney international investments - cough>> for which they get foreign tax credits.

You and Romney can well be dismissive of the tax code which sets up these legitimate nonpaying situations. But don't just summarily dismiss those who don't pay income taxes. Many of those in the 47 percent are taking full advantage of the tax laws to lower or zero out their federal tax bills, just like Romney does.

While Romney says he can't count on the 47 percent who aren't paying federal income taxes, he might want to fact check himself.

A 2010 study by the Tax Foundation found that nine of the 10 states with the most nontaxpaying residents are in the South.

If you (or the Romney campaign) check every pollster's presidential election map, you'll find most of those states are solidly Republican when it comes to picking a president.