Describe the White House candidates in one (printable please!) word

What one word would you use to describe the 2012 candidates for president and vice president?

Remember that your mother (or mine!) might be reading, so keep it clean, please.

That word limit also is this week's (a day late; I was traveling on Sunday) By the Numbers figure.

In each survey, Pew asked around 1,000 people to use one word to describe the candidates. Pew characterized each word response as positive, negative or neutral. The top raw number responses, not percentages, in those categories were then put into graphics for each presidential and vice presidential candidate.

Let's start with the descriptors for the guys already in the top two U.S. elected offices.

For or against Obama: In the sitting president's case, people tend to like Obama or dislike him. Few are neutral.

The top two positive descriptions were "good" or "trying." 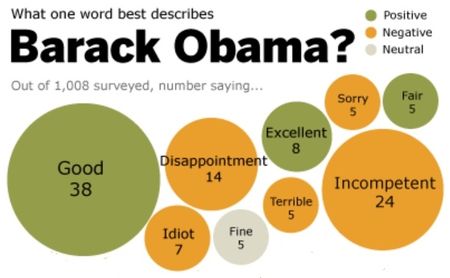 The two leading negative words for the president were "failure" and "incompetent."

Only four words were deemed neutral by Pew in describing Obama: "president," "OK," "fine" and "alright." Is it just me, or do three of those four make it seem like Pew interviewed teenagers?

The top negative term for Biden was "idiot." The top positive word was "good." And "OK" led the neutral term list. 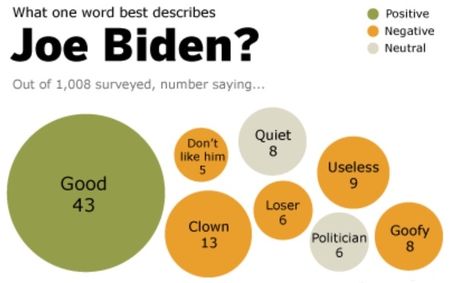 Not surprisingly, Pew found wide partisan differences in the one-word impressions of Biden. However, even Democrats were not highly positive about the vice president.

Again, that's not a shock since there was a mini Draft Hillary for VP movement before the Democrats convened in Charlotte, N.C., to officially rename the current holders of the country's top offices as their 2012 candidates.

Not that positive of perception of Romney: Mitt had the same problem as Joe in the latest Pew one-word survey. More people had negative things to say about Romney than positive words.

Overall, reports Pew, 42 percent of the words were clearly negative with the most common being "liar" and "arrogant." 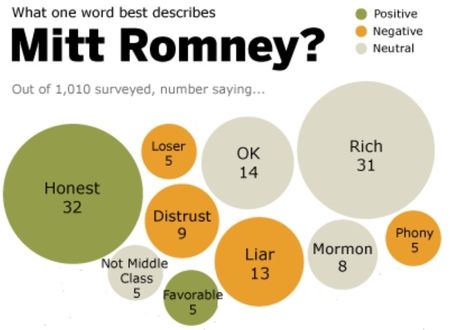 The 28 percent who offered positive words about Romney most often described him as "honest."

Interesting that the top bad and top good words are polar opposites. Are folks listening to and watching the same guy?

As for neutral designations of Romney, the obvious "rich" was the most common.

This latest Pew one-word survey does indicate, however, that Romney has made inroads in his political positioning efforts.

The word "conservative" was volunteered by 20 or more people in the late August survey. In previous polls, said Pew, the word was used by fewer than 10 people.

Getting to know Ryan: The Republican VP candidate is the one-word survey newcomer. Americans' take on Ryan in the brief period they got to know him before the poll was conducted is mixed.

The good news for the veep wannabe is that slightly more words (37 percent) about Ryan were positive than negative (35 percent).

On the positive side, "intelligent" was the most uttered word about Ryan, closely followed by "good." 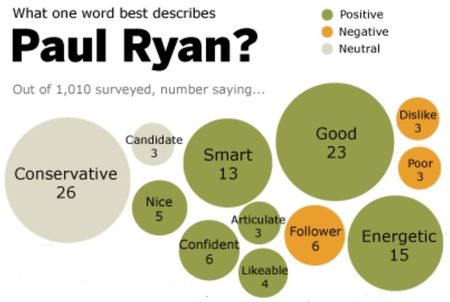 There was a wide array of negative words, with "idiot" leading this list. Again, as with Romney, note the opposite perceptions topping the good and bad word lists.

I also am intrigued that this word was a top negative descriptor for Ryan's Democratic opponent. Is this a reflection of the men or perhaps our view of the office?

The next closest negative word for Ryan was "extreme."

The most cited neutral word used to describe Ryan was "conservative." Remember, this is Pew's characterization of the word; many in the GOP will count "conservative" as positive. It was followed by the neutral words, per Pew, of "young" and "unknown."

Check out the full Pew surveys and see how your choices of a good, bad or ugly, sorry, neutral word (I'm still tripping on Clint Eastwood's empty chair conversation) for the four men match up with the poll respondents' answers.