Congress getting ready to clock out

Summer vacation time is over. School's back in session. Moms and dads are back at work.

But one group of Americans is about to take most of the rest of the year off.

Check out the official House calendar. Our Representatives returned to Capitol Hill this week after their regular August/Labor Day/party conventions recess, I mean district work session.

Lawmakers will break again Monday and Tuesday, Sept. 17 and 18, for Rosh Hashanah. 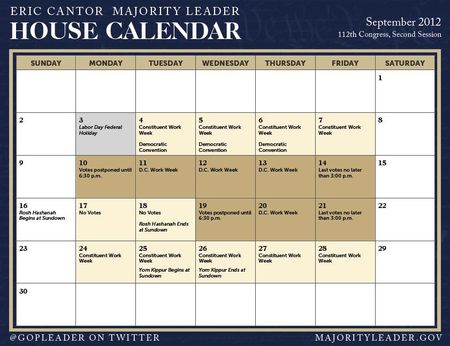 Then they'll head back to campaign, I mean to their districts to hear concerns of their constituents, the week of Sept. 24 through Sept. 28.

In October, the House is scheduled to meet only that first week. The rest of the month is for the Columbus Day holiday and district work time.

Representatives are planning in November to sandwich eight days in session around Thanksgiving.

Bah humbug when it comes to passing bills.

Not much time for much work: The bottom line is that the House is planning to show up for work for a total of 29 days, less than a month, these last fours months of the year.

The Senate hasn't issued its work schedule, but you can bet it's on a similar abbreviated timetable.

Being a member of Congress, especially in election years, apparently is a part-time job. Nice work if you can get it.

What that means for you and me is that there is precious little time for legislation to keep the economy from falling off the fiscal cliff or to reinstate tax laws that expired at the end of 2011 or to deal with issues that have popped up this year, like a way to keep the government from shutting down on Sept. 30.

A deal on a continuing resolution between House Speaker John Boehner (R-Ohio), Senate Majority Leader Harry Reid (D-Nev.) and President Obama in late July that should (we hope!) be agreed to shortly to give Uncle Sam enough money to operate through March 31, 2013.

Both the House and Senate have approved separate Bush tax cut bills, but the differences in the two measures make it unlikely that a bill will find it's way to the president's desk any time soon.

It's not just the tax rates where the two chambers are at odds, but also on how much we might pay on capital gains and qualified dividends, as well as estate tax provisions and who will be hit by the alternative minimum tax.

The Senate Finance Committee has signed off on a package of extenders, those tax breaks that are perpetually renewed for just one or two years at a time. But the House, from whence all tax legislation must originate, hasn't really done anything about extenders yet.

And what about the 2 percent payroll tax cut for employees that ends on Dec. 31?

The reality is that Congress will have to do more work than it has planned this year to address all these outstanding tax issues.

And the problem for them and us and the Internal Revenue Service is that the necessary legislative work likely will be done, as has been the case in recent years, as December is winding down.

I hope I'm wrong. I hope that as soon as the Nov. 6 votes are tallied Senators and Representatives will get their butts back to D.C. and take care of these outstanding issues so we'll have at least a few weeks to make the necessary tax moves.