Heading out for a long Labor Day holiday break? If you need some reading for your last weekend of summer beach lounging, check out the Republican Party's official platform.

OK, you'd prefer a mystery or romance novel. I get it. I'm a tax geek, not a total kill-joy.

But since I am a tax geek -- and you are here at a tax blog -- here's an excerpt from the 2012 GOP platform, specifically what the party wants to do regarding our taxes:

Tax Relief to Grow the Economy and Create Jobs
Taxes, by their very nature, reduce a citizen's freedom. Their proper role in a free society should be to fund services that are essential and authorized by the Constitution, such as national security, and the care of those who cannot care for themselves. We reject the use of taxation to redistribute income, fund unnecessary or ineffective programs, or foster the crony capitalism that corrupts both politicians and corporations.

Our goal is a tax system that is simple, transparent, flatter, and fair. In contrast, the current IRS code is like a patchwork quilt, stitched together over time from mismatched pieces, and is beyond the comprehension of the average citizen. A reformed code should promote simplicity and coherence, savings and innovation, increase American competitiveness, and recognize the burdens on families with children. To that end, we propose to:

Extend the 2001 and 2003 tax relief packages — commonly known as the Bush tax cuts — pending reform of the tax code, to keep tax rates from rising on income, interest, dividends, and capital gains;
Reform the tax code by reducing marginal tax rates by 20 percent across-the-board in a revenue-neutral manner;
Eliminate the taxes on interest, dividends, and capital gains altogether for lower and middle-income taxpayers;
End the Death Tax; and
Repeal the Alternative Minimum Tax. 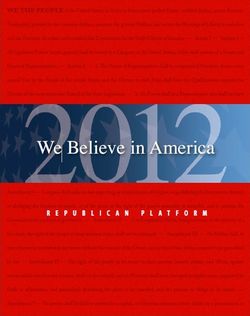 Fundamental Tax Principles
We oppose retroactive taxation; and we condemn attempts by activist judges, at any level of government, to seize the power of the purse by ordering higher taxes. We oppose tax policies that divide Americans or promote class warfare.

Because of the vital role of religious organizations, charities, and fraternal benevolent societies in fostering benevolence and patriotism, they should not be subject to taxation, and donations to them should continue to be tax deductible.

In any restructuring of federal taxation, to guard against hypertaxation of the American people, any value added tax or national sales tax must be tied to the simultaneous repeal of the Sixteenth Amendment, which established the federal income tax.

The statements above are the main portion of the Republican platform regarding taxes, but they're mentioned in other sections of the document. In the discussion of homeownership, for example, the GOP platform says, "We strongly support tax reform; in the event we do not achieve this, we must preserve the mortgage interest deduction."

And while those aren't topics most folks focus on during holiday breaks, they're worth an examination when you get back home.

Why? Because as I've blogged before, the political parties' platforms do matter.

These official statements tell us what the party stands for, what its members believe is important and what they're willing to fight for legislatively.

Essentially, platforms give us a preview of what to expect if the party gets a chance to control the making of our laws, tax and otherwise.

And apparently a lot of folks agree with me.

Increased interest in party platforms: A Pew Research Foundation poll released the day before the Republicans convened their nominating convention in Tampa found more people were interested in the GOP platform than in its presidential and vice presidential candidates' speeches. 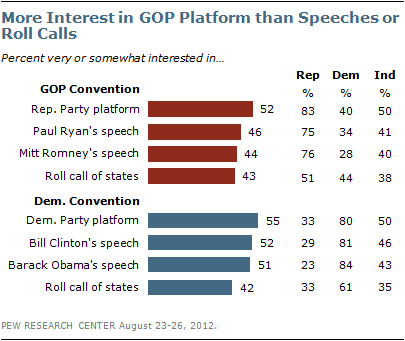 A majority of poll respondents also said they want to know more about the Democratic platform than hear the speeches at that party's gathering in Charlotte next week.

Not so much official interest: Apparently those on the ground in Tampa, however, didn't share the platform love.

Bloomberg reporters at the just-concluded Republican National Convention said they couldn't find anyone who would admit to having read the platform, let alone claim credit for authorship of it:

"It just materialized one day. We glanced through it," said an RNC spokesman. "We thought, 'Well, here's something interesting,' so we posted it on our Facebook page. But that doesn't mean we endorse any particular view expressed in it."

I couldn't find the platform on the GOP Facebook page, but it is available via Scribd or you can download the PDF version for your very own political documents library.

When the Democrats release their official party platform, I'll post links and the tax information contained in it.