Another part of the 2012 presidential campaign puzzle fell into place when Paul Ryan on Friday afternoon released his 2010 and 2011 tax returns.

Yep, only those two years' worth of 1040s for the Republican vice presidential candidate.

The GOP presidential nominee made public his preliminary tax calculations for last year when he released his official 2010 return. Romney (or rather, Romney's accountants) had to do a down-and-dirty 2011 Form 1040 to see if he had to send the Internal Revenue Service any cash when he filed for an extension.

But back to the potential veep's taxes. 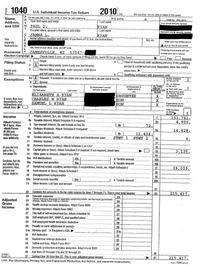 What Ryan's taxes reveal: There aren't any big surprises in Ryan's returns.

For 2010, Paul and Janna Ryan filed a joint return and claimed their three kids as dependents.

Their income was mostly from wages ($153,741), but also included interest, ordinary and lower-taxed qualified dividends, capital gains and royalties from some oil/gas and mineral rights. To whittle down those earnings, the Ryans claimed $26,395 in itemized deductions. 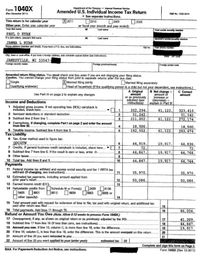 That year the couple also had to file an amended return to report earnings from a trust that were omitted from their original 1040. The trust, valued at between $1 million and $5 million, was left to Janna Ryan following her mother's death in 2010.

The reason for the missing the money is not an uncommon one. The Ryans didn't get the K-1 form from the Prudence Little Living Trust by the April filing deadline. That happens all the time. The hubby and I dealt with delayed filings due to slow K-1s after he received a similar, but much, much, much smaller bequest from a relative years ago.

I suspect the Ryans will get an extension for their 2012 return so they can include the trust money on their original filing next year. They don't want a repeat of the $59 penalty they paid for underestimating their 2011 taxes.

Percentage performance: OK, now for the numbers that everyone really wants.

What was the effective tax rate the Ryans paid on their income?

Maybe Ryan needs to talk with his running mate's tax advisers to see if they can help him get the lower tax rates that Romney regularly pays.

Now about Romney's returns: Last week, Romney said he has paid taxes every single year, obviously a reply to Senate Majority Leader Harry Reid's (D-Nev.) unsubstantiated claim that Romney had somehow managed to pay no taxes for a decade.

"I did go back and look at my taxes and over the past 10 years I never paid less than 13 percent. I think the most recent year is 13.6 or something like that. So I paid taxes every single year," Romney told reporters on Thursday, Aug. 16, as he wrapped up a press conference while campaigning in South Carolina.

Romney has complained that constant queries about his personal taxes are a distraction. He's also expressed amazement at the "fascination" with his taxes, which he characterized as "very small-minded compared to the broad issues that we face" in the U.S.

So, says Romney (and his wife, Ann), all of us wannabe tax return gawkers just need to get over it. Or, as Atlanta Journal-Constitution blogger Jay Bookman explained:

"Tax accountant Mitt Romney, having given investor Mitt Romney's tax returns a thorough and independent review, reported Thursday that presidential candidate Mitt Romney had paid a minimum of 13 percent of his income in federal taxes every year for the past decade."

So there. That's all we need to know.

Legitimate tax questions awaiting answers: It's not small-minded to want a little more information on how the man who wants to run the United States -- and our money -- handles his own finances.

Realistically speaking, most people probably don't have a problem with Romney's low effective tax rate. We know he's rich. We know he has good tax counsel. If anything, a lot of folks are primarily jealous.

But they also are suspicious, and becoming more so each day that Romney insists he will show only his last two returns.

What's the deal, Mitt? If your taxes were just run-of-the-mill, you would have released a big batch of 1040s by now just like every other major candidate has in recent years.

Romney's determined refusal has a lot of us thinking like Peter J. Reilly, a CPA who blogs for Forbes, who says his BS detector is going crazy. Reilly and others want to know 13 percent of what, Mr. Romney.

The Obama campaign suggested last week that the GOP candidate prove his tax compliance by releasing five additional years of returns. "No, but thanks for asking," came the quick reply from the Romney camp.

More than money at stake: So now Romney has us thinking that there's something in his earlier returns that's a bit sketchy and which wouldn't sit well with most voters. Why else wouldn't he show us his tax filings and be done with this small-minded topic?

In essence, Mr. Romney, your returns will shine a light on your character more than your finances. And your refusal to share more than two years' worth of tax returns is making for very dim character illumination.