If Taxmageddon arrives on Jan. 1, 2013 -- which I don't expect to happen, but with Congress, who really knows? -- one of the taxes that will return is the marriage penalty, as I discussed with Bob Moon in his recent Marketplace radio story on fiscal cliff tax implications.

Some states, however, still have laws that produce a marriage tax penalty for their residents.

The Tax Foundation created a map showing the 16 states where couples are likely to pay more when filing a joint state tax return than if they filed separate individual tax returns with their state tax department. 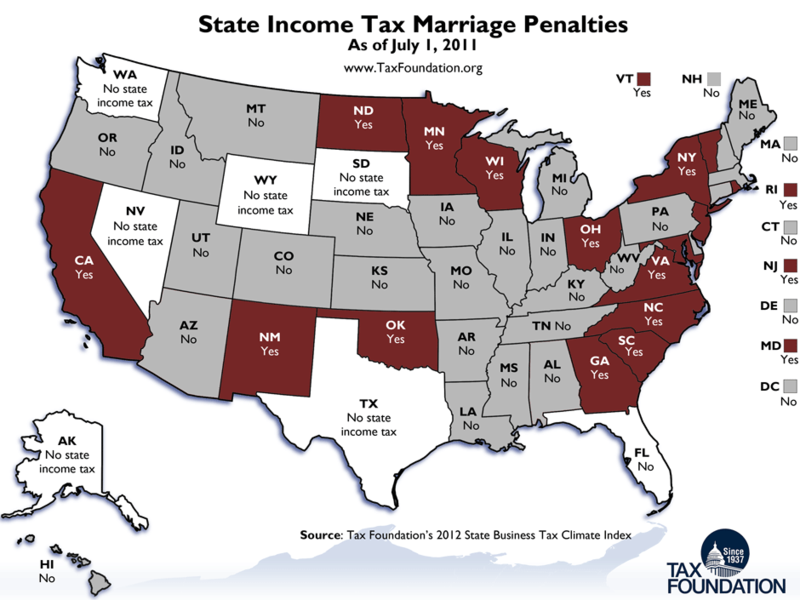 "In a progressive tax system," notes the Tax Foundation, "higher incomes are taxed at higher rates, and in states where the same tax brackets apply to both single and married filers, the effective tax rate on the combined income of two earners can be significantly more than if the two incomes were taxed separately."

These tax lucky couples pay less as a jointly filing couple than they would if they were single filers.

This tends to happen when one partner earns the majority of income and the disparity in the earnings is wide. The higher-income spouse in effect sees his or her money pulled down into a lower tax bracket.

Someone always pays: The marriage penalty itself was a creation of Congress.

Back in 1969, Representatives and Senators tried to equalize what was then denounced as an unfair advantage couples held over single taxpayers.

Yep, taxes are funny. But nobody laughs when they end up personally costing you more.

I am not against if singles payed taxes higher than married. It would be unfair to married people if they will pay higher taxes than singles.

Singles and married must not have the same tax to be payed. They are earning, maybe the same, but they have different number of mouths being fed.