Republicans have gathered in Tampa to officially kick off their 2012 effort to have Mitt Romney move into the White House.

The core of the Romney campaign is to focus on how he would revive the sluggish economy.

But based on some recent national polls, Romney might want to keep his vice presidential choice, Paul Ryan, out of the spotlight in discussing economic issues.

Ryan has been a U.S. Representative since 1999. During his almost 14 years in Congress, Ryan has moved up the Republican leadership ranks. He currently serves on the tax-writing Ways and Means Committee and chairs the House Budget Committee.

And it's Congress, where Ryan now is a fixture, that most middle-class Americans blame for their economic woes.

Middle-class woes are Congress' fault: "Since 2000, the middle class has shrunk in size, fallen backward in income and wealth and shed some -- but by no means all -- of its characteristic faith in the future," according to the Pew Research Center.

The Washington, D.C.-based think tank recently surveyed 1,287 adults who describe themselves as part of the declining middle class.

And who do they think is responsible for this decade of decline? Most point the finger squarely at Congress. 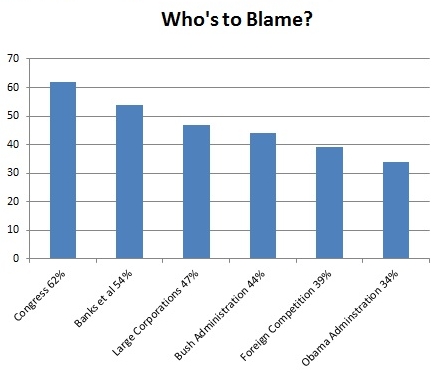 Poll respondents were asked to rank each choice separately
as to whether they blamed each "a little" or, as shown above, "a lot"
for their economic difficulties. (Graph by Kay Bell)

Coming in second in the economic blame game, 8 points behind Capitol Hill lawmakers, are banks and other financial institutions.

That's not surprising since so many folks have had issues with the way their mortgage loans and, in many cases, their subsequent foreclosures were handled.

And don't even get the Pew poll respondents (or me!) started on the Troubled Asset Relief Program, or TARP, otherwise known as the too-big-to-fail bank bailout.

Rounding out the to-blame bunch, in order of responsibility they bear according to the Pew survey, are large corporations (another possible political pothole for Romney to watch out for), the George W. Bush administration, foreign competition (one more Romney alert) and the Obama administration (bad news for the Democrats).

Just 8 percent of those asked blame the middle class itself for their economic problems.

This gloomy economic view comes at the end of a decade in which, for the first time since the end of World War II, mean family incomes declined for Americans in all income tiers, say Pew researchers.

But the middle-income tier, defined in this latest Pew Research analysis as all adults whose annual household income is two-thirds to double the national median, is the only one that also shrunk in size.

That decline of the middle class, says Pew Research, is a trend that has continued over the past four decades.

Other polls also bad news for Congress: Many of these same Pew poll respondents apparently participated in a Wall Street Journal/NBC News poll also released last week that found that only 12 percent of registered voters approve of Congress.

Remember then? That's when Uncle Sam was hammering out the details of buying the aforementioned troubled bank assets and the country was plunging headlong headed into the economic crisis from which it's still struggling to exit.

Asked another way, the poll found that another 82 percent said they disapprove of the job Congress is doing. The WSJ/NBC News poll has been asking this question since 1990.

And yet another national poll, this one from Gallup, this month found that just 10 percent of Americans approve of the job Congress is doing.

That figure tied the Gallup result from last February as the lowest opinion of Congress in the polling firm's 38-year history of asking Americans to evaluate Congressional actions.

Similar to the news organizations' poll, Gallup found that 83 percent disapprove of the way Congress is doing its job.

The only very, very tiny bit of good news for the current crop of Senators and Representatives is that these latest poll numbers are still a bit better than those in a November 2011 poll by the New York Times and CBS News. That public sentiment survey recorded a mere 9 percent approval rating for Congress.

Still, given the American public's current disdain of Congress, Paul Ryan might not want to talk about all the years he's been on Capitol Hill.