This morning I blogged about the 30th Olympiad, whose official Roman numerals make printing the formal title a bit dicey.

But that number also is significant to California.

To deal with the Golden State's budgetary issues, Gov. Jerry Bown is pushing a ballot initiative that would hike the income tax on Californians earning more than $250,000 a year.

The measure also would raise the statewide sales tax paid by every consumer.

Of course, The Schools and Local Public Safety Protection Act of 2012 must be approved by California voters. It will appeare as Proposition 30 on the November ballot. 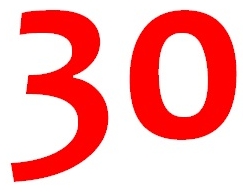 And that numerical designation also is this week's By the Numbers figure.

Millionaires tax: The key numbers to California's wealthiest citizens, however, are income tax rates and brackets.

The proposal has been called a millionaire's tax, but it actually would kick in at a quarter of a million.

If Proposition 30 is approved, in 2013 California's current maximum tax rate of 9.3 percent would give way to three new top rates. The state would tax income of residents who make more than $250,000 at the following rates:

The one bit of good news for wealthier Californians is that the increased tax rates are temporary. They would run just through 2018.

Like the proposed income tax hike, Prop 30's higher sales tax rate also would be temporary. It would be in effect 2013 through 2016.

It asks the majority of California voters, who carry little of California's tax burden, to pass a large increase on the top 2-3% of taxpayers who ALREADY pay half of all state income taxes.

The more you learn about Proposition 30 and the forces behind it, the less you'll like it. It's bad public policy, horrible tax policy, and an abuse of the democratic process.
http://soquelbythecreek.blogspot.com/2012/07/california-proposition-30-governor.html