Earlier today you read the thoughts of two of my Twitter pals, Frank Woodman and Yoenis Cespedes, on whether the name "Bush tax cuts" was still accurate or appropriate when referring to the tax rates and breaks that are set to finally expire (maybe) on Dec. 31, 2012.

Now it's my turn to have the last word on the Bush tax cuts title!

I know this from personal experience. How I put them together has been paying my bills for most of my adult life.

And despite that rhyme we use to console kids when they've been given an awful nickname, we know that words can indeed hurt.

Maybe that's why so many people seem to be upset with the Bush tax cuts moniker.

Personally, I don't get the current aversion to the name.

It's true. George W. Bush, or Dubya as long-time readers of the ol' blog know I like to call my fellow Texan, was responsible for the cuts. 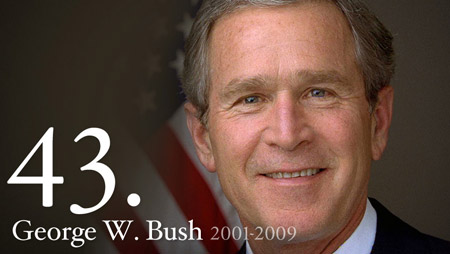 OK, Dubya didn't personally write the tax legislation. But he campaigned on a lower-taxes platform. Once in office, he encouraged Congress to pass the lower tax legislation. And I can't recall or find any evidence anywhere that in 2001 and 2003 when the cuts were signed by Dubya that he had any objection to his name being attached.

So what's the big deal now?

Sure, it's a presidential election year and the Bush-approved rates are taking some heat from the Democrats. Welcome to Washington, D.C.

The Republicans who helped craft and then enact the Bush tax cuts have tried for years to have them made permanent. That seems to indicate they still like them. So what's wrong with acknowledging their provenance now?

Heck, Obama wants to keep some of them around. If he wins and eventually gets his way, I'd expect him to co-opt them and call the whole new package the Obama tax cuts.

As for those who say the name is wrong because the original Dec. 31, 2010, expiration date has come and gone, that doesn't matter for naming purposes. The Bush tax cuts didn't expire and have to be re-enacted; they were continued in their entirety and as such the laws should keep their collective name.

Presidents (and other policy makers) have and will continue to have their names associated with defining pieces of legislation.

Yes, part of it is media driven. Journalists and television commentators like shorthand in covering issues and Americans love nicknames, even (or maybe especially) for political topics. It's been 40 years and we are still living with "Everything-gate" thanks to that D.C. office building break-in by bumbling Richard Nixon associates.

Since then we've lived through Reaganomics, which ushered in the bipartisan and historic tax act of 1986. But Reagan's fiscal policies also conjured among the loyal opposition another word phrase: voodoo economics.

That was followed by Clintonomics, which bumped the Regan tax rates back up.

Hmmm. I lived in the D.C. area during the Clinton Administration and even met Bill a couple of times and just now realized how charming the man was; his tax policy move managed to escape being branded the Clinton tax hikes.

And maybe that's the real problem: Loss of branding control.

When the Bush tax cuts were new and shiny, the GOP couldn't stop referring to them by that name.

Now, however, it's become an anathema.

I'll grant you that the phrase "Bush tax cuts" does indeed take on a derogatory tone when a Democratic lawmaker, candidate or spokesperson utters it. I repeat, welcome to Washington, D.C.

But it is possible for the GOP to change the connotation back to the positive glow it had when the tax cuts' namesake was in office. The Republican party just needs to take a cue from what the current administration has done with Obama's signature piece of legislation.

The White House no longer cringes when someone calls the health care reform act Obamacare. In fact, many in the Democratic party -- including those who currently work and live at 1600 Pennsylvania Avenue -- now proudly refer to the Patient Protection and Affordable Care Act as Obamacare.

So all you supporters of those 2001 and 2003 lowered rates embrace the Bush tax cuts name. It was your president's crowning domestic achievement. Who cares if the other side considers it the decade's biggest domestic debacle?

Maybe we were sort of right after all. Words will never hurt us, at least politically, as long as we take control of them.