There's still a lot of buzz about the Obama tax rate proposal, a lot more than there really should be for something that isn't going to happen, if at all, until mid-November at the earliest.

Why the delay on Capitol Hill? Because the prez wants to keep the 10 percent through 28 percent tax rates and bump the top two rates to 36 percent and 39.6 percent, and the Republicans want to keep all the Bush-era tax rates as is.

Neither side has gotten along very well and things have only gotten worse this election year.

Still, all of us are bouncing around numbers and rhetoric and predictions of what might happen with our taxes at some point down the road because that's how we Americans roll. We like to speculate and postulate and rant and rave about possibilities and problems and possible problems.

We also like graphics. Tables and charts are easy to read and the good ones are pretty, too.

So here are some visual aids in connection with the various tax possibilities.

The figures in the table below are for a married couple filing a joint 2012 tax return.

The 2013 rates, without Congressional and White House action, will revert to the 2000 tax year rates.

That split of the 33 percent bracket also then shows up twice in the pre-Bush tax cut column. In that case, however, the tax rate would be only the 36 percent amount.

And the actual 2013 income amounts will be adjusted later this year for inflation.

Who gets what under which plan? Now we get to the pretty stuff, at least visually.

Citizens for Tax Justice, a progressive Washington, D.C., policy nonprofit, provides this look at the average tax cut under the competing Obama proposal, which would keep the 10 percent through 28 percent tax rates and bump the top two rates to 36 percent and 39.6 percent, and the Republican plan to keep all the Bush-era tax rates as is: 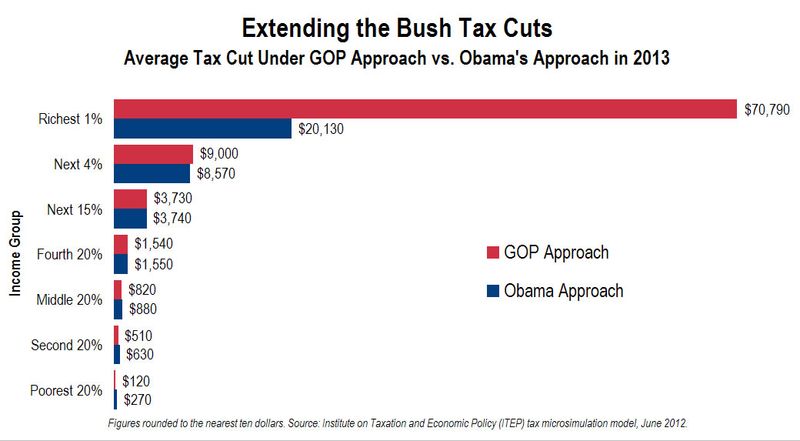 The group also has put together another graph showing the share of tax cuts going to each income group under the two proposals: 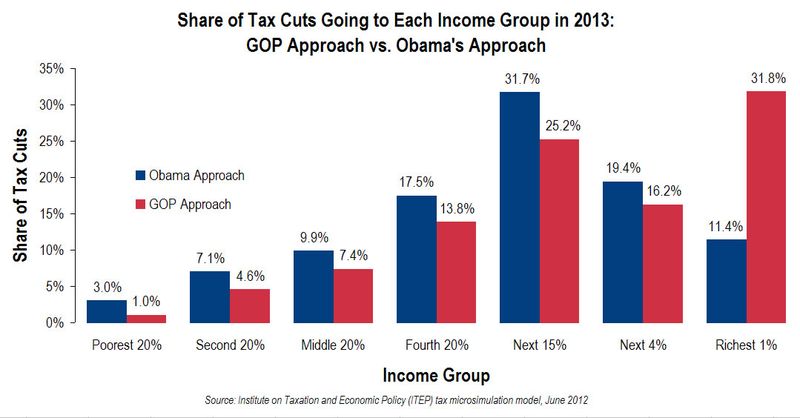 What's the dollar damage? Finally, we have the potential costs of the tax plans. That's a big deal since everyone is so worked up about the growing federal deficit.

Again, Citizens for Tax Justice has crunched some numbers, including for a separate Democratic plan to raise the top tax rate threshold from $250,000 to $1 million. CTJ says that for 2013 the various tax plan costs will be:

All the plans will cost the U.S. Treasury billions of dollars. Those revenue losses will have to be made up via other taxes from somewhere else or through spending cuts.

But that's another battle to be speculated about and fought over later.

Thank you for the simple tables and graphs. I really just want a full tax overhaul, but I have no faith in the current Congress to tie their own shoes.

i am awful progressive but i quite accept that corporate tax rates ought to be lower to boos up investment in the economy, Canada had a 43 percent corporate rate﻿ in 2000 but now its 15 percent rate in 2012 and our economy is appointing way better than ever.thanks for the great analysis.
Accounting Services in washington