The proper use of penalties, tax and otherwise

As in most things sports, and especially at the ultra-emotional college level, the reactions from opposing sides are loud and clear.

The boos from Penn State apologists include the complaint that NCAA President Mark Emmert has overstepped his authority, inserting the college sports oversight body into criminal proceedings.

Worse, they say, he didn't wait until all legal action has run its course. And, argue Penn Staters, the penalties will punish not those who committed unspeakable crimes, but current and future Happy Valley students and athletes.

As you've probably figured out by my use of the word apologists, I support Emmert's decision.

The NCAA has for too long been a moribund organization that reacts at a glacial pace to reported violations of college sports rules. And for too long, money minting football behemoths have gotten the benefit of the NCAA doubt.

Emmert, who's been in charge of the NCAA for just over two years, has sent a strong message that putting a football or any sports program ahead of human decency is no longer acceptable.

"One of the grave dangers stemming from our love of sports is that the sports themselves become too big to fail, indeed, too big to even challenge," Emmert said in announcing the Penn State sanctions. 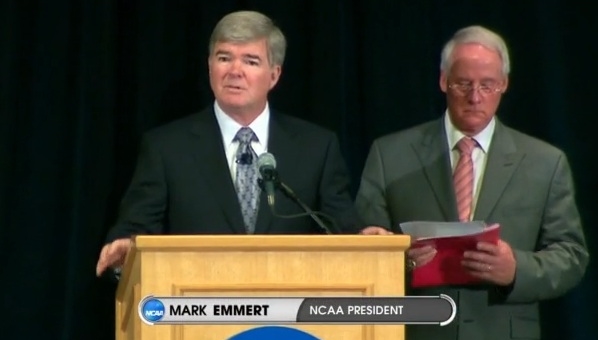 "The result can be an erosion of academic values that are replaced by the value of hero worship and winning at all costs. All involved in intercollegiate athletics must be watchful that programs and individuals do not overwhelm the values of higher education. In the Penn State case, the results were perverse and unconscionable.

While there's been much speculation about whether this fits this specific bylaw or that specific bylaw, it certainly hits the fundamental values of what athletics are supposed to be doing in the context of higher education."

The art, not science, of crime and punishment: Immediate pro-Penn State reaction was that the NCAA ruling won't do any widespread good.

Bad actors in colleges and their sports departments will continue to do bad things, say university supporters. There will always be institutions and their leaders and coaches who will believe they should escape notice and punishment.

Someone always breaks every rule. Does that mean we don't establish any rules or don't enforce those we have just because people insist on breaking them?

No. That's the point of the rules and the penalties.

We keep catching and punishing them. And Emmert's ruling undercuts the belief by arrogant universities that they will be the ones who are given a perpetual pass. Now that Penn State's been whacked, it will be much easier to penalize future violators.

As to the complaint that the wrong people will pay the price, you're correct.

Penn State's "culture of concealment" cited by the Freeh Report, which the university itself commissioned and accepted, is gone but current students and athletes will suffer.

To that I repeat, so what?

That's how punishments tend to work. Someone commits a crime or violates a rule and even if they don't get caught and penalized, the rules are tweaked to make commission of future crimes harder and the penalties tougher for those who insist on continuing to try to avoid the rules.

Essentially, we all pay a price for someone else's transgressions.

Tax break culture of entitlement: So why am I, a tax blogger with no connection at all to Penn State, spending so much time on this topic?

Because the general circumstances also relate to taxes, where tax-abusing sins of the fathers are routinely paid for via bigger checks to the U.S. Treasury by their children.

When taxpayers figure out a way to circumvent a tax law, tighter eligibility rules are created for future potential tax law breakers.

A tax benefit that once was relatively easy for some to get is ended or made harder to claim.

And in the case of criminal tax evasion, tougher penalties are often enacted for those who continue to try to get around the laws.

Welcome to the real world. They got away with it. We pay.

The tax arena also is almost as competitive as sports fields when it comes to protecting home field advantages. Specific individuals and industries have long taken advange of tax laws and they are loathe to let them go.

This decided culture of tax entitlement comes from legislative pandering, especially in election years, particularly for "too big to fail" taxpayer sectors … or those which write too big not to cash campaign checks.

The bottom line is that once a tax break is put on the books, it's damn nigh impossible to get rid of it.

This "don't touch my tax break" attitude is what lawmakers will have to deal with if they ever actually start looking at real tax reform.

Let's hope that Representatives, Senators and the President will take a cue from Emmert and the NCAA and say enough is enough when it comes to entrenched, complicated and costly tax breaks that benefit too few taxpayers.