Oh my God! Did you hear about Mitt Romney's tax returns?

Those exchanges were flying furiously across the Internet this afternoon, sharing the scoop that the infamous computer hacker Anonymous has broken into the Internal Revenue Service's database and obtained more of the Republican presidential candidate's 1040s.

Oh my God is right. What did we laugh at before the world went online?

Pay attention people: This is so obviously false for so many reasons.

If such a thing had indeed happened, you can bet the IRS would be in major CYA mode.

And let's not forget Congress. Capitol Hill would be on top of it, with Representatives and Senators climbing all over each other to be the first to hold hearings, issue statements, point fingers and announce that they/their candidate(s)/their political party would do a better job at securing such private information.

More telling, however, is the website that broke the story. It was first "reported," and yes those quotations are appropriate here, by Free Wood Post.

That website's tagline is "News That's Almost Reliable" and it has categories for Almost News, Shady Facts, Vile Vociferousness and Sorta True.

And just in case those website design signals aren't enough for you to get the joke, check out the site's disclaimer:

"Free Wood Post is a news and political satire web publication, which may or may not use real names, often in semi-real or mostly fictitious ways. All news articles contained within FreeWoodPost.com are fiction, and presumably fake news.

Any resemblance to the truth is purely coincidental, except for all references to politicians and/or celebrities, in which case they are based on real people, but still based almost entirely in fiction.

FreeWoodPost.com is intended for a mature, sophisticated, and discerning audience."

Yes, folks, you do have to do a tiny bit of discovery before you accept things that show up on the Internet and then get circulated willy nilly.

Enjoy the joke: Once you accept that the Free Wood Post item about the mysterious Anonymous successfully retrieving 25 years' worth of Romney's tax returns and publishing them without permission on major websites is fiction, it's a fun read.

Nine days before the website alerted the gullible Internet world to the IRS hacking, Stewart had revealed that The Daily Show had obtained all of the Romneys heretofore secret federal tax filings. 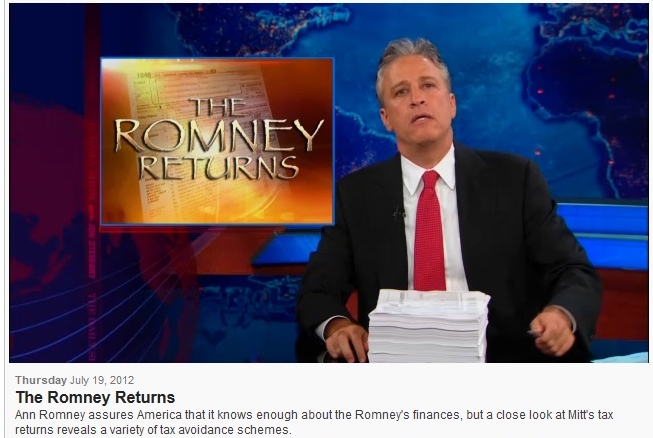 Romney also took advantage of onshore offshore accounts, said Stewart. These are financial accounts in a U.S. town that Romney purchased and populated with Swiss nationals.

And as to the question everyone wanted answered, just how did the Comedy Central program get its hands on all these much sought after Romney tax records?

"We made it up!" Stewart proudly announced.

For such audacity and the chuckles they produce, we thank The Daily Show and Free Wood Press.

It is no small secret Utah Senator Orin Hatch and other LDS faithful lawmakers seem to have convinced the US Government that only LDS/Mormon return missionaries are capable of reading, writing and speaking a foreign language. Yet when they return these missionaries test at only an intermediate level of fluency - thus federally funded statewide elementary school level mulitple languages immersion programs were established (in what appear to be predominately LDS neighborhood schools. These children are expected to have advanced level foreign language fluency upon graduation for high school). Mormon return missionaries (60,000 serving worldwide) have been recruited by the CIA and FBI for decades. It is quite interesting how most international abductions, assaults, and deaths of Americans abroad go unsolved for months if not years, but when a LDS/Mormon church member is kidnapped (Russia & England), killed (China), or assaulted (worldwide) the crime is solved by either the FBI/CIA in 7-14 days or less. My bets are on Romney's hijacked tax returns mystery being resolved and the culprits arrested in less than 7 days.