"Should our tax voyeurism really be allowed to supersede the right of tax privacy we all enjoy? I don't think so."

I wrote that last fall after actor Alec Baldwin and a New York state senator got into a public spat via Twitter about making personal tax returns public.

Back then, my main arguments were (a) that most candidates don't do their own taxes so their filings offer no insight as to their personal understanding of the tax code or their ability to fill out the forms and (b) "you can be sure that if returns are released, there will be no hint of any potentially questionable tax-cutting moves."

Cut to summer 2012 where the presumptive Republican presidential nominee has released just his 2010 return and preliminary 2011 filing. Mitt Romney says he'll turn over his final 2011 filing (he got an extension) when it's done. But that, he insists, is it.

I still believe that the main reason we -- voters, the media, the opposing political parties -- want to see candidate tax returns is primarily the global fascination with all things celebrity, and make no mistake, politicians in this day and age are celebrities.

And thanks to reality television, there's no such thing as too much celebrity information, so we want to know everything possible about every candidate.

Yes, everyone deserves to keep some things from public view. But when the person who might lead the United States wants to keep secrets about a process, paying taxes, that each of us must participate in, how can he or she expect us to continue to have faith in that system or his or her ability to change it?

That faith, a leap of which we all take when we vote for every candidate, is critical. And knowing that the candidate indeed walks the voluminous campaign talk is vital in keeping that faith.

More harm than good? The irony in Mitt Romney's no-open-return position is twofold.

Second, by refusing to be more transparent about his returns, Mitt Romney could be hurting himself.

Some of the GOP's most enthusiastic standard bearers, including The Washington Post's George Will and the Weekly Standard's Bill Kristol, say it's way past time for Romney to come clean.

More importantly, by continuing to withhold additional tax information, speculation is growing about what is on Romney's returns, specifically what is he trying to hide?

Democrats obviously are having a field day here. Some details in what little Romney has revealed are used in a new Obama campaign ad that asks "what is Mitt Romney hiding?" 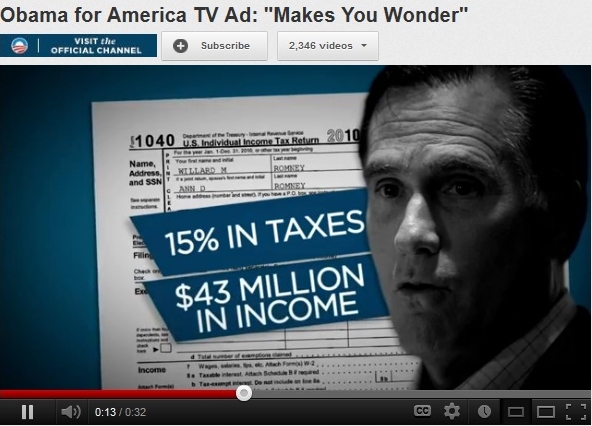 Romney's secrecy, says the ad, "makes you wonder if some years he paid any taxes at all. We don't know."

Making it a requirement? And now Congress is getting in on the tax return revelation act. Added meddling by Representatives and Senators into just about anything is always a scary thought.

Rep. Sander Levin, D-Mich., ranking Democrat on the Ways and Means Committee, is working on a bill that would require presidential candidates to make public 10 years of tax returns and disclose overseas accounts.

Senate Democratic Whip Richard J. Durbin of Illinois says he is considering ways to add language to existing disclosure rules that would require all federal candidates and members of Congress to disclose any investments in a tax haven country.

I'm not saying that Levin and Durbin don't sincerely believe in their in-the-works legislation, but their comments also are conveniently political.

Their proposals won't pass this election year, if ever. Members of Congress are among the worst when it comes to making things, including their finances, clear and House Minority Leader Nancy Pelosi (D-Calif.) has flat-out rejected such manndatory disclosure for herself and her Capitol Hill colleagues.

Plus, we don't need more politics in this or any campaign. What we need is more information. And that includes more voluntary info about candidates' tax returns.

We need openness and honesty. So I've changed my mind.

Romney's tax returns from years when he headed up Bain Capital Management or ran the Salt Lake City Olympics or has just been campaigning for the White House probably won't show any impropriety. I suspect what we will see is that as he prepared for the 2012 campaign, Romney moved his money around so that he's only incredibly wealthy, not incredibly mind-blowing "are you kidding me?" wealthy.

But even without some scandalous tax admission, Romney's and any other candidates' tax returns might reveal where a candidate's public rhetoric and his or her private finances diverge.

That's probably not going to be the case with Romney. Again he's on the record as supporting the creation, retention and expansion of tax laws that benefit the wealthy, of which he solidly is a member.

So what else might we learn from Romney's 1040s? And why doesn't he want us to?

Those are legitimate questions that American voters deserve to have answered before Nov. 6. For that to happen, Romney needs to release a representative array of his tax returns now.