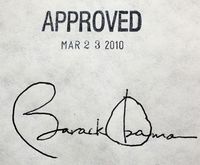 The Supreme Court ruling on the constitutionality of the health care act, known as the Patient Protection and Affordable Care Act of 2010 if you're into formal titles or Obamacare if you're a bit more casual with legislative nomenclature, continues to reverberate.

The high court's split decision -- the individual mandate is OK, but states can't be forced to participate in the health care law's expanded Medicaid program -- is causing problems for some states on both political and financial fronts.

The Medicaid expansion is expected to extend coverage to roughly 15 million low-income people. But that number will be lower if states opt out of the expansion.

Texas' and Florida's governors have already announced their non-participation plans. So have the leaders of Louisiana, Mississippi, South Carolina and Wisconsin.

The Ricks in the governor's mansions of the Lone Star (Perry) and Sunshine (Scott) states are adamant that although Uncle Sam initially will pick up the full Medicaid expansion tab, as the program costs transition to the states it will take billions from each state's bottom line.

Many hospitals and medical associations disagree with the governors. And in Texas and Florida, states that rely heavily on property taxes because they don't have an individual income tax, county leaders are worried.

Property tax problems to consider: In Texas, several local leaders, health policy analysts and officials at urban hospitals across the state say that Perry's rejection of federal billions in Medicaid expansion would hurt county taxpayers and the hospitals they support, forcing them to continue to pick up much of the tab for treatment of the uninsured.

Compounding the local tax collectors' fears is a recent report from the Rockefeller Institute of Government that found local governments and school districts nationwide already are facing "a serious fiscal crunch accelerated by weakness in property tax collections."

The public policy research arm of the University at Albany, N.Y., says that local property taxes declined by 0.9 percent in nominal terms in the first quarter of 2012, after two consecutive quarters of growth. 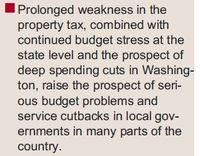 But when adjusted for inflation, local property taxes actually declined by 2.8 percent in the first quarter of 2012, marking the sixth consecutive quarterly decline in real collections, according to the report.

Lucy Dadayan, a senior policy analyst at the Rockefeller Institute and author of the report, also notes that the severity of the weakness in the property tax varies among states, but it is particularly acute in states that have experienced the largest declines in housing prices. Florida is one of those states with a hard hit housing sector.

Will the anti-Obamacare governors hold firm? Will the economy pick up enough at all levels to help counties replenish their accounts?

Since the Medicaid provision, as well as the associated health exchanges, don't kick in until 2014, states could change their minds. And some governors are waiting until after Nov. 6 to decide since a change in the White House will mean a change in the health care law.

If Obama is reelected and his signature piece of legislation goes forward, I tend to agree with Wendell Potter, a columnist and corporate watchdog, who says that when the feds start doling out billions to bring more Americans into the Medicaid program, Perry, Scott and the other opposing state leaders will be on board.

Governors, regardless of their political affiliation, are like the rest of us. We all find it awfully hard to turn down money.

Tony, I spent almost 20 years in Washington, DC, working on the Hill and then in private industry lobbying Congress. Trust me, there have always been factions and there always will be. I concede it's gotten worse, but that's come from the big money that feeds the political beast. Again, I know this personally as when I left my Congressional staff job, I worked for two Fortune 100 companies that gave $$$ to legislators. But it's gotten much worse, especially with the lack of transparency with Super PACs.

Obama is such a fraud. What good has he done for our country, besides breaking it up into political factions?