This afternoon the House will vote for the 31st time to repeal the Patient Protection and Affordable Care Act (PPACA). UPDATE: They did it. The vote was 244 to 185. 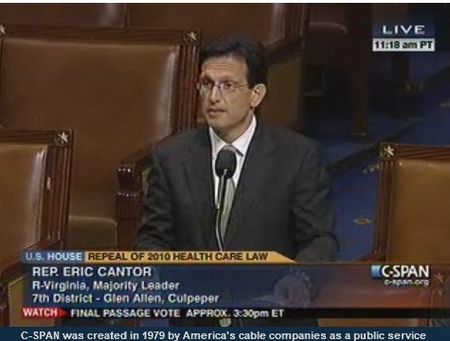 Senate Republicans are looking at ways to do the same "in the near future" in that chamber.

These continuing anti-health care efforts are both symbolic and political.

There's no chance that the medical coverage law, known as Obamacare, will be stricken from the books as long as its namesake has a veto pen.

But both Republicans and Democrats view the health care law and the tax component that was crucial in the Supreme Court's recent ruling to uphold it as a valuable issue in this year's presidential and Congressional campaigns.

And so the opportunity for Congressional pontification and recorded votes that can be cited in campaign ads is too appealing for politicians to pass up.

Hearing on expanded tax powers: Tuesday, in advance of today's House vote, the Ways and Means Committee held a hearing on the tax ramifications of the high court's health care decision.

"In light of the Court's ruling, Congress now has the broad power to levy taxes far beyond the historic understanding of revenue," said the committee's chairman Dave Camp (R-Mich.) in his opening statement.

Most witnesses echoed that assessment, telling the tax-writing panel that the high court's ruling greatly expands the boundaries of Congress' taxing power.

Congress is big winner: But one thing that didn't come up during the hearing, and I suspect won't be mentioned on the House floor during today's pre-Obamacare repeal vote, is just what members of Congress will get if the law is eliminated.

"Repealing President Obama's healthcare law would let members of Congress keep their government-subsidized insurance coverage after they retire — a benefit they lost under the health law.

Instead, lawmakers and staff have to get coverage through the insurance exchanges created by the healthcare law."

When the amendment was added, Sen. Charles Grassley (R-Iowa) noted that it would ensure that lawmakers live under the same rules as their constituents.

But if Obamacare is repealed, Representatives and Senators will be spared that change and be forced to keep coverage that, writes Baker, is "widely regarded as one of the country's more successful healthcare programs."

I'm sure, though, that such personal medical insurance technicalities are the last thing on House members' minds today as they discuss the health care act.