Sure, life sometimes imitates art or vice versa. But in seeing political connections in the much-anticipated new Batman movie, Rush Limbaugh has gone a bit batty, even for him. 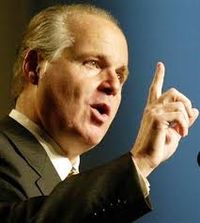 The conservative talk radio host is convinced that a liberal Hollywood/Obama conspiracy is behind the name of the latest Batman supervillian.

In what Comedy Central's Jon Stewart characterized as "a bit of divine intervention" for political comedians, The Dark Knight Rises pits Batman against the evil Bane.

Limbaugh, however, doesn't see it as coincidence. It is, he told his listeners, a concerted attack against presumptive Republican presidential nominee Mitt Romney, who once ran Bain Capital.

"Do you think it is accidental that the name of the really vicious, fire-breathing, four-eyed, whatever-it-is villain in this movie is named Bane?" Limbaugh asked. He went on to answer himself:

And the thought is that when they're going to start paying attention to the campaign later in the year and Obama and the Democrats keep talking about Bain, not Bain Capital but Romney and Bain, that these people will start thinking back to the Batman movies, 'Oh yeah, I know who that is!'"

Oh yeah, and we all know how Rush likes to keep his ratings up. That's likely the real reason for his rant, since he did acknowledge in passing the lead time necessary to get movies to the screen. This third installment of director Christoper Nolan's Batman story was in process long before the 2012 presidential campaign.

And the Bane character was not invented for this latest film. Bane first appeared in 1993.

After the mostly disdainful reactions to the Bane/Bain Obama campaign connection, Limbaugh backtracked a bit.

But if Rush wants to keep searching for homophonic pop culture/political bogeymen, he can check out four other fictional bad guys, two of which are spelled B-A-I-N.

As for future Caped Crusader foes, I'm thinking it would be fun to see a rotund media blowhard who literally spits out deadly spiked words get taken out in upcoming comics and/or movies.