Is Batman cheating on his taxes?

In addition to being a tax geek, I'm also a partial superhero geek. I say partial because I'm partial to only one comic book superstar: Batman.

So I was thrilled to see the infographic below that looked at the finances of Batman's alter ego Bruce Wayne as well as that of Spider-Man's Peter Parker.

And I was doubly thrilled to see that taxes were part of the visual comparison of the two men's money.

I was, that is, until I saw that the millionaire (in earnings, according to the infographic, although Forbes says Bruce Wayne is worth $6.9 billion, putting him at number eight on the magazine's 2012 list of the 15 richest fictional characters) industrialist, philanthropist and playboy seems to be cheating on his taxes.

Take a look at the relevant excerpt below: 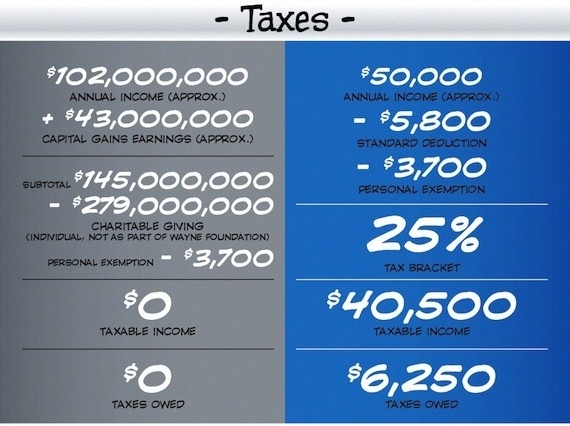 The problem is that, even without the overall limits on itemized deductions, known as the Pease limitation after the Congressman who championed it and which are scheduled to return when the Bush tax cuts finally expire, there's still a limit on how much of your charitable gifts you can claim on Schedule A.

In most donation situations, that is, gifts to public charities that meet Internal Revenue Service 501(c)(3) guidelines, a taxpayer's deduction is limited to 50 percent of adjusted gross income, or AGI.

Basically, the deduction for all the charitable contributions you or Bruce Wayne or anyone makes during the year cannot be more than half of what we make. Wayne's approximate income in the infographic is $145 million. His AGI is probably a bit less.

Still, the $279 million in the graphic is almost twice his income. So he can't deduct that full amount in order to wipe out his taxable income.

That means his real -- and yes, I get the absurdity of using the word "real" in connection with a comic book character -- tax bill would be, well, he would have one instead of owing zero taxes.

I know Bruce is rich and has well-paid and knowledgeable tax attorneys and accountants on his payroll, but even they won't be able to get this one past the IRS.

Deferred, not lost, deduction: For even the most generous of us regular taxpayers, the 50 percent AGI deduction limit isn't a problem.

But if you or I do happen to win a lottery and decide to give away a big chunk of the cash, we won't necessarily lose the excess donation amounts as a deduction. We just have to carry forward the extra amount to a future tax year.

Uncle Sam allows up to five years of rollovers to claim the full charitable gift. Remember, though, the 50 percent limit still applies in each of the carry forward tax years.

Now that that's settled, to the Bat Cave!

Another thing to consider: household employer taxes for having a butler/estate manager in Alfred Pennyworth. That again would generally keep his tax bill from being zero. I guess the Bruce Wayne could be in hot water like Nanny Gate of a few years ago.