If the weather isn't too hot where you are, take a walk today in honor of Henry David Thoreau. He was born on July 12, 1817. 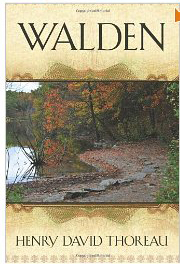 Thoreau is known by most as the author of "Walden," also often referred to as "On Walden Pond."

The book was the product of Thoreau's stay in a cabin at Walden Pond, now part of Massachusetts' Walden Pond Reservation, from July 1845 to September 1847.

Because of Thoreau's legacy, Walden Pond has been designated a National Historic Landmark and is considered the birthplace of the conservation movement.

But Thoreau was more than just a thinker, naturalist, walker and, according to some stories, a cantankerous curmudgeon.

He also was a tax protester.

On one of his walks in July 1846, so the story goes, Thoreau ran into the local tax collector, who took the opportunity to ask Thoreau for payment of six years of delinquent poll taxes. Thoreau refused, citing his opposition to slavery as well as his displeasure that his money would be used to pay for the "imperialistic" Mexican-American War.

That stance earned Thoreau a night in jail. The gray bar hotel stay would have been longer if he'd gotten his way, but his aunt paid the overdue tax bill.

But one night was enough for Thoreau to come up with the foundation for the other book for which he is quite famous, "Civil Disobedience." Originally published as "Resistance to Civil Government," Thoreau explained why private conscience can constitute a higher law than civil authority.

"Under a government which imprisons any unjustly," Thoreau argued, "the true place for a just man is also a prison."

A walk is probably a more comfortable way to honor Thoreau.

Or you could give a potentially tax-deductible gift to your favorite nature area or environmental organization.

But if you wish, in Thoreau's memory, to withhold your taxes on principle and go to jail for that civil disobedience, Uncle Sam will probably oblige you.

And somewhere, Henry David Thoreau would be smiling.