Tiny, but rich, percentage of Americans would pay more under Obama tax plan

It's no secret that the very rich make up a very small percentage of America.

It's also no secret that potentially bigger tax bills for the wealthy is the sticking point in the current national battle over what's to become of U.S. individual rates in 2013.

Two tax policy research groups now have weighed in on the debate with calculations showing that only 1.9 percent of Americans would lose any part the current income tax cuts in 2013 under Obama's tax proposal.

And that percentage is this week's By the Numbers figure.

The Institute on Taxation and Economic Policy (ITEP) and Citizens for Tax Justice (CTJ) looked at the Republicans' and Obama's plans for the Bush tax cuts, the moniker that's still sticking to the variety of tax reductions enacted by No. 43 in 2001 and 2003 and extended in 2010 through the end of this year.

Essentially, the GOP wants to keep everything as is. Obama would continue some of the cuts, but wants the income tax rate to be higher for married couples making $250,000 a year ($200,000 annually for single filers).

Tax cut plans' state-by-state effects: In addition to coming up with the 1.9 percent national average of folks who would see higher tax bills under the Obama plan, the two Washington, D.C.-based tax policy research groups also analyzed the effects on taxpayers in every state and the nation's capital.

Here in my Lone Star State home, the differences aren't that dramatic in the middle ranges. But folks at the lowest earnings level would get a tax cut that would be almost three times larger under the Obama plan.

That's reversed when you go to the top of the earnings scale. Texans in the top 4 percent of income would get a $1,260 bigger tax break under the GOP plan. 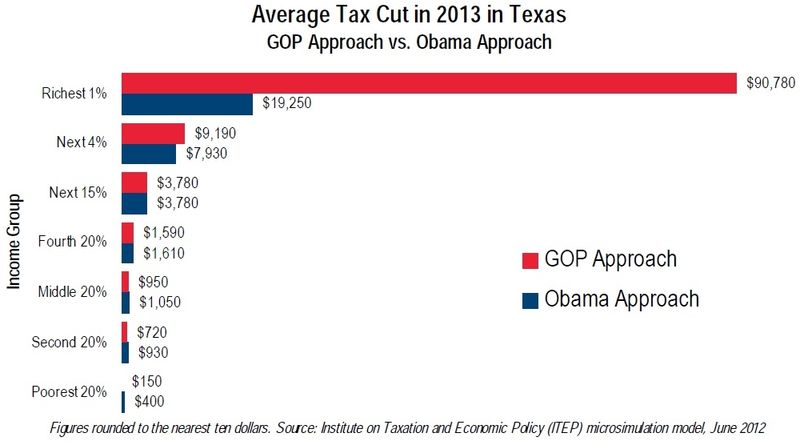 Taking the biggest tax cut hits: Which states' taxpayers would see the biggest tax bills under Obama's plan? As expected, that would happen in states with large higher income populations.

But the order of the locales might surprise you.

The states in which more than 1.9 percent of their residents would lose some of their current tax cuts are:

Still, the fraction of top earners in the Mountain and Magnolia states are hoping the GOP plan prevails so they would face substantially lower tax bills next year.

Check out how you and your neighbors would fare under each scenario at CTJ's interactive tax plan comparison map.

I notice that you "skipped over" that which I almost always notice about virtually 100% of all tax plans by all democrats at all times.

The socialists known as the democrat party virtually hate the institution of marriage.

Therefore it makes no difference if referring to upper income persons or poor persons the democrats will punish marriage.

I've been a software developer in Austin Texas since 1995.

Every single job I've had can be traced directly back to a rich guy making a speculative investment with discretionary funds! EVERY. SINGLE. JOB.

If the government sucks funds from those rich guys to 'invest' in crony capitalism boondoggles, gun running, rewarding schools for failing, and paying people far more than I make for sitting around thinking of ways to protect me from myself, then I am worse off.

On the other hand, maybe the evil rich guy just has so much money in his mattress it won't matter.