At sundown 79 years ago, moviegoers were treated to a really big screen presentation.

On June 6, 1933, Richard Hollingshead, Jr. opened what he called a park-in theater in Camden, N.J. It was the first of what came to be known as drive-in movie theaters. 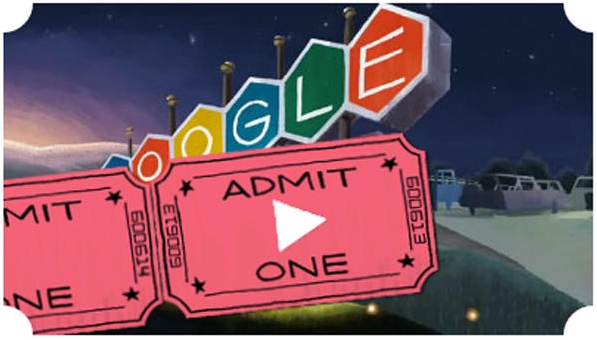 Click the "ticket" above to see the animated Google drive-in doodle.

Thank you Mr. Hollingshead. I spent many a West Texas summer night enjoying movies at the Yellow Jacket Drive-in.

Movies have changed a lot since that first drive-in and even since I watched films al fresco back in the '60s and '70s under starry Kermit, Texas, skies.

Among the more notable changes are film finances.

It costs a lot more to attend and make movies nowadays. That's why many production companies seek tax breaks offered by states.

Sorry, there aren't any tax subsidies (yet!) for us movie fans lining up at our nearest cineplex.

But filmmakers don't have to look far. Most states offer some sort of tax incentive to film and television production companies.

Are film tax breaks worth it? But the question always comes up, especially now that states are slashing budgets, as to whether such tax breaks are worthwhile.

A new study by Ernst & Young LLP examines the economic benefits of the various state film production tax incentives and analyzes the most effective way to evaluate whether the tax breaks are economically successful.

The primary objective of the programs is to increase private-sector economic activity. By that measurement, a film tax break typically is considered effective in the short-term when it "pays for itself" by generating additional state taxes that exceed the state cost of the credit.

State economic benefits extend beyond the production activities themselves, said Cline. They include increased activity by suppliers to the film industry and increased consumer spending from higher incomes.

I must note that the E&Y report was commissioned by the Motion Picture Association of America. That's clearly stated at the beginning of the study. That the MPAA asked for the examination doesn't mean that the data or analysis is incorrect or slanted. I just wanted, as E&P did, to make sure you knew.

Tax break troubles: Some film tax breaks, however, are causing the states to spend more, specifically to prosecute individuals who have tried to cheat the jurisdictions out of the tax breaks.

What's become known as the Iowa film tax credit fiasco -- Joe Kristan chronicled the years-long scandal at Tax Update Blog -- is the most widespread abuse of these tax breaks. On May 31, the seventh person convicted of cheating the Hawkeye State out of money by falsely filing for film tax breaks was sentenced to a 10-year prison term.

Also last month, just after the E&P report was released, another film tax credit fraudster was sentenced to jail.

Director Daniel Adams was sentenced to up to three years in a Massachusetts state prison. He also was ordered by the court to pay nearly $4.4 million in restitution and serve 10 years on probation when he completes his prison term.

Adams, 51, previously had pleaded guilty to defrauding the Bay State of $4.7 million by submitting falsified budgets, bank account and investment documents and contracts for enlarged actor salaries while filming "The Golden Boys”" in 2008 and "The Lightkeeper" in 2009 near his Cape Cod home.

Adams was caught after Massachusetts Department of Revenue investigators flagged his tax returns as suspicious and began looking more closely at documents Adams submitted with his film tax credit application.

While advocates of movie making incentives argue that such abuses are rare, you can bet that the recent criminal case resolutions should prompt state legislators to give film and TV tax credits extra review during upcoming budget battles.