The third time is definitely is a charm for the Internal Revenue Service when it comes to bringing bucks back home from foreign tax havens. 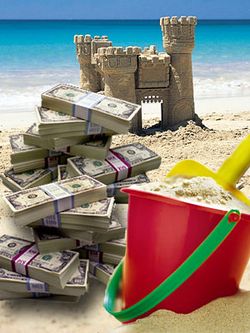 The tax agency says that its latest offshore voluntary disclosure program, or OVDP which is the term the IRS prefers instead of tax amnesty, has pushed the amount collected in all its efforts to more than $5 billion.

In 2009 and 2011, the IRS offered foreign account holders the chance to tell Uncle Sam about their accounts in exchange for lower penalties and the promise of no criminal tax evasion charges.

But if folks didn't 'fess up and the tax investigators eventually found the accounts, all bets were off.

Offshore amnesties I and II: That tax carrot and stick approach led in 2009 to more than 14,700 taxpayers voluntarily disclosing their previously secret foreign accounts.

Encouraged by that response, the IRS opened up a second OVDP in early 2011.

This round had an added incentive. People could clear up their offshore tax issues in advance of the impending foreign account reporting requirement changes designed to make it even tougher to hide income offshore.

So it wasn't a surprise when the IRS decided in January to offer a third chance for folks to confess to hiding income outside U.S. borders.

This latest offshore disclosure opportunity is ongoing. But the IRS decided to brag about the success it's seen the first half of 2012.

IRS Commissioner Doug Shulman said the combined offshore voluntary disclosure programs have so far resulted in the collection of more than $5 billion in back taxes, interest and penalties.

Around 33,000 voluntary disclosures were made under the first two programs; another 1,500 accounts have been revealed to date in this latest round.

If you want to come clean about your offshore accounts under the current OVDP, contact your tax professional to make sure you follow all the rules. You can get an idea of what's required at the IRS' special 2012 offshore disclosure Web page.

Don't forget FBAR: Speaking of foreign accounts, remember that if you must file a Foreign Bank and Financial Accounts Report (FBAR) Form TD F 90-22.1 this year, the deadline is June 30.

But since that's on a Saturday, you need to get the report to the Treasury Department's Detroit office by close of business on Friday, June 29.

David Shapiro,an international tax lawyer in Philadelphia offers this wise, and timely, advice via Twitter (he's @ShapiroTaxLaw): "At this point, FBARs should be filed with an express courier - only deemed filed when received, not when mailed."

And unlike regular IRS filings, the TD F 90-22.1 deadline is not pushed to the next business day when the deadline falls on a weekend or federal holiday.