Why is the IRS so slow to pay tax whistleblower rewards?

Sen. Charles Grassley is blowing the whistle on the federal tax whistleblower office.

Under revisions to the tax cheat tracking mechanism, rewards to whistleblowers are no longer discretionary. They are to receive 15 percent to 30 percent of the collected proceeds.

But that's not happening, at least not to the extent that whistleblowers and Grassley, a member of the Senate Finance Committee who in 2006 led the rewriting of law that created the IRS Whistleblower Office, has asked the IRS and Treasury Department why it's taking so long to process and pay tax rewards. 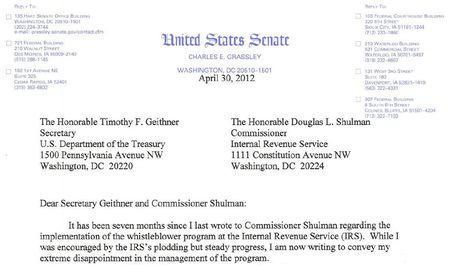 Grassley last touched base with the whistleblower program when it was revealed that the IRS revised provision in the Internal Revenue Manual that made getting a reward for ratting out tax cheats more difficult.

"Since last writing to Commissioner Shulman, I have received even more correspondence from whistleblowers whose claims are not progressing at the IRS. Such correspondence, along with recent cases filed in the Tax Court and corresponding press coverage, indicate that my worst fears are coming true," wrote Grassley. "The lack of progress is demoralizing whistleblowers, and they might stop coming forward."

Grassley also expressed concern about reports that the Whistleblower Office "is now the source of significant delays in issuing awards" to those reporting alleged tax evasion.

The senator again expressed concern that the two-year statute of limitations issue, under which some whistleblower awards were not granted because they were not acted upon within that time frame. Grassley wants the IRS and Treasury to provide Congress with the number of claims for which the Whistleblower Office has proceeded before the statute of limitations has expired.

And Grassley also is unhappy with reports that the Whistleblower Office "does not even begin to consider whether a whistleblower can receive an award before the taxpayer has exhausted all appeal rights." That, wrote the senator, "seems like another way to delay issuing awards."

Inefficient use of time: Grassley's latest inquiry was prompted in part by the participation of the whistleblower program's director at a conference at the Ritz-Carlton in Miami Beach.

I appreciate Grassley's insistence that the IRS and all its employees provide cost-effective use of the taxpayer dollars that pay their salaries.

In this instance, however, Grassley needs to back off.

IRS Whistleblower Office Director Stephen Whitlock was right to be at the Offshore Alert conference. It was a whistleblower who blew the lid off the UBS abuses.

Making sure that the IRS is on top of new offshore tax dodges and ways to uncover them is and should be one of the agency's top priorities.

But as for the delays in paying those citizens who are helping do the job, well you go get 'em Chuck!