I'm a life-long political junkie, but I've gone beyond even caring about who wins. I just want the elections over so that I can answer my phone or turn on my television without being blasted by some candidate's spiel.

Lone Star State politicians, if you believe their campaign ads, are just like many of their vote begging counterparts across the country.

Not a single one of them is going to ever raise taxes.

Number five in SmartMoney's list of the 10 Things Presidential Candidates Won't Say is "I will raise taxes." The article elaborates:

George H.W. Bush famously proclaimed, "Read my lips: no new taxes," to a cheering crowd during his acceptance speech at the 1988 Republican National Convention. But the catchy line backfired. Four years later during Bush's re-election campaign, his challenger, then governor of Arkansas Bill Clinton, attacked Bush for having gone back on his word.

Experts say most presidents since Jimmy Carter have raised taxes in one way or another. Today, with the large budget deficit looming, a candidate hoping to roll out any new programs will have to either raise taxes or cut spending in other areas, say analysts. That said, admitting that you're going to raise taxes if elected is close to political suicide for a presidential candidate. Just ask former vice president Walter Mondale, who made the following honest declaration when he was challenging then President Ronald Reagan in 1984: "Mr. Reagan will raise taxes, and so will I. He won't tell you. I just did." His statement wasn't the only reason Mondale lost in a landslide but it was likely a contributing factor, says Barbara Perry, a senior fellow with the Miller Center at the University of Virginia, a nonpartisan institute that studies the presidency. "He went down to a resounding defeat."

The magazine can eliminate the word presidential. The tax word, unless preceded by "anti-" or "no," is rarely uttered by any politician at any level.

I repeat: They're all lying.

Well, maybe not all of them.

We know that the Democrats want to hike tax rates for the rich. Just who is rich and potentially more taxable is a moving target.

Changing GOP tax positions? And now it looks like some Republicans also are acknowledging that taxes are a necessary part of responsible governing.

The Washington Post reports that some in the GOP are taking a broader view of how to finance the country. Specifically, they don't want to be bound by "the pledge." 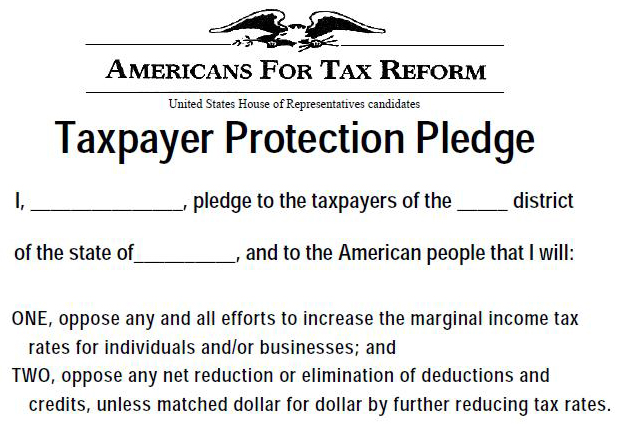 You know this document. It's the creation of Grover Norquist, founder and president of Americans for Tax Reform.

By signing the document (there's a House pledge [pictured above], one for U.S. Senators, as well as state governor and legislator versions), candidates vow to "resist any effort" to raise individual or business tax rates.

They also swear in the House and Senate versions to oppose the elimination of tax credits and deductions unless they are matched dollar-for-dollar with tax cuts.

However, an increasing number of GOP candidates for Congress are declining to sign the promise to oppose any tax increase, a small sign that could signal a big shift in Republican politics on taxes.

Of the 25 candidates this year promoted by the National Republican Congressional Committee (NRCC) as "Young Guns" and "Contenders" — the top rungs of a program that highlights promising candidates who are challenging Democrats or running in open seats — at least a third have indicated they do not plan to sign the pledge authored by anti-tax crusader Grover Norquist.

Two of the seven candidates promoted by the NRCC as the "Young Gun Vanguard" — candidates competing in open seats that are considered Republican-leaning — also have declined to sign.

Time to take a stand: As many other lawmakers have noted, they represent their constituencies, not a group with a political agenda that ties their policy making hands.

And sometimes responsible lawmakers must even stand up to their own voters who don't have an overall view of or interest in what's better for the country as a whole.

I know statesmen and women have been in very short supply in recent years, with politicians and short-term lawmakers popping in and out of Congress.

But there are times when what's good for the United States, even if it doesn't mesh with an electorate's narrow parochial wishes, is more important.

Some of the Republicans saying no thanks to the no-tax pledge, or previous signers who now reject it, appear to realize that.

A mix of spending cuts and revenue increases will be needed to lower the budget deficit and adequately fund critical federal programs, both on the social and defense fronts.

Tough talk: Rep. Scott Rigell, a freshman Republican from Virginia, signed the no-tax pledge in 2010. Earlier this year, he announced that he wouldn't renew no-tax promise as he runs for reelection.

Such a commitment, Rigell said, could stand in the way of an everything-on-the-table approach to tackling the country's growing debt.

"I don't want to get tied up in knots," NRCC Young Gun and former Republican Massachusetts state senator Tisei told the Washington Post. "If there's a loophole that can be closed that ends up generating additional revenue that can be used specifically to pay down the national debt, I'm not going to lose sleep. And I don't want to be bound by the pledge not to close it."

A former GOP leader has even stronger words about the pledge and those who aren't backing away from it.

"For heaven's sake, you have Grover Norquist wandering the earth in his white robes saying that if you raise taxes one penny, he'll defeat you," Simpson, who co-chairs Obama's budget deficit reduction commission, said during an appearance Sunday on CNN.

"He can't murder you. He can't burn your house. The only thing he can do to you, as an elected official, is defeat you for reelection," said Simpson.

"And if that means more to you than your country when we need patriots to come out in a situation when we're in extremity, you shouldn't even be in Congress."

You're wrong here. Ron Paul is a candidate who isn't lying when he says he would never raise taxes. And despite what the mainstream media would like you to believe, he's still in the running.

Bruce, I think it depends on what happens on Nov. 6. If Obama is re-elected, I expect things to stay as they are for two years. He'll accept the 35% top rate and continuation of estate tax as is in exchange for two-year extension of 4.2% payroll tax and a longer term debt ceiling deal. Give, take, give, take. And, as the new catch phrase goes, kick the can.

In reference to "the pledge", I half think that with our leaders not taking it, especially those who have in the past, this is a prelude, to the tax cuts being taken from tax payers in 2013, and many taxpayers are going to find themselves in a higher tax situation, paying more in taxes than they have in years.
In a lot of tax payers eyes they will be paying more then they ever have.