If anyone doubted that the excise tax on tanning would pay off, they only need look at Patricia Krentcil. She appears to have single-handedly contributed hundreds of dollars to the U.S. Treasury via the tax that was enacted as part of health care reform. 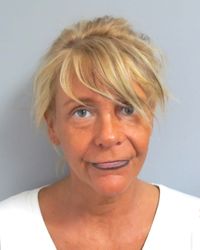 The 44-year-old New Jersey woman, whose skin looks much darker than her mug shot (at right, courtesy The Smoking Gun) in other photos and TV interviews, was arrested for allegedly putting her 5-year-old daughter in a tanning booth where the child reportedly suffered serious burns.

New Jersey state law prohibits children younger than 14 from using tanning booths. Children between ages 14 and 17 must be accompanied by an adult.

Krentcil is charged with felony child endangerment and was released on a $25,000 bond.

Krentcil says it was all a big misunderstanding.

"It's like taking your daughter to go food shopping," Krentcil said. "There's tons of moms that bring their children in."

Another famous Garden State mom-to-be is not buying it.

Nicole Polizzi, better known as Snooki of Jersey Shore reality TV fame, called Krentcil crazy, saying that "everyone knows you are not supposed to take kids" to tanning booths.

Remember, this evaluation is from the woman who supported Sen. John McCain (R-Ariz.) for president because he opposed the tanning bed tax. When Snooki questions your tanning tactics, you can be pretty sure you've crossed the artificial UV line.

As for her baby, the bronzed Polizzi told US Weekly, "My baby's gonna be naturally tan."

If Snooki calls you crazy then you'd better see a shrink ASAP. I hope the punishment is memorable.