We humans are a funny, and stubborn, lot. It seems that, as the saying goes, we are doomed to repeat mistakes because we don't learn anything from the first time we make them. 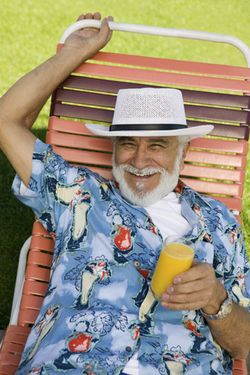 Two surveys taken by LIMRA a couple of months apart indicate just how that tendency is hurting Americans' retirement prospects.

In February, two-thirds of U.S. workers still on the job said they weren't saving enough for retirement.

In April, nearly half of America's workforce admitted to not contributing to any retirement plan.

Who's not saving for retirement? OK, if you know you aren't saving enough to retire on your own terms as noted in the first survey, then why the heck aren't you contributing to an IRA or a workplace plan as confessed in the second survey?

I know times are still tough for a lot of folks, so making  your rent and buying groceries comes before saving for some distant post-work scenario.

But I suspect that the not learning from past mistakes penchant is playing a part in this disturbing "not ready for retirement" trend.

So is youthful negligence.

The April survey found that a lot of younger workers are blowing off retirement saving opportunities. More than half (56 percent) of Americans ages 18 to 34 were more likely to be among those not saving for their golden years.

This is disappointing statistic, right up there with the more anecdotal "what's a Roth IRA?" situation that prompted financial bloggers to talk about this retirement vehicle back in March.

Young workers might think they are invincible and have plenty of time to get ready for retirement.

But their youth is a prime argument for putting away retirement money now. The awesome power of compounding for many, many years is a nest egg's best friend.

While there's some -- OK, lots of -- doubt about just what future Social Security benefits might look like, the tax code still offers nice tax breaks for certain retirement accounts.

And if Social Security benefits are eventually reduced, or you have to wait longer to get them, you'll be glad you have a private retirement savings cushion.

Here's are the highlights of the most popular tax-advantaged retirement savings options.

Traditional Individual Retirement Account (IRA)
With a traditional IRA, your investments grow tax deferred. This means your retirement money will grow faster because you're not having ot take any of it out to pay the IRS.

If you don't have a retirement plan at work, you might be able to deduct your traditional IRA contributions on your annual income tax return.

You will, however, owe taxes on regular IRA money when you take it out. And that tax rate will be at your ordinary income rate. And even if you don't need the money, you must start taking required minimum distributions, or RMDs, and paying taxes on them, when you turn 70½.

Roth IRA
The annual contribution amounts are the same for a Roth IRA. But this retirement money goes into the account after taxes, so there's no deduction.

But the news isn't all bad. In fact, it's darn good. Roth IRA money is not taxed at all when you take it out in retirement. That can be as soon as you turn 59½.

You don't, however, have to take the money out at any certain age. Unlike a traditional IRA, you can leave a Roth alone to keep earning even after you celebrate your 70½ birthday.

A Roth IRA is usually the best account for a young worker.

401(k)
Named after the section of the tax code that authorizes this retirement vehicle, a 401(k) is a workplace plan that is offered as an employee benefit.

You contribute a portion of your pre-tax paycheck to this tax-deferred retirement account. This has a dual benefit. Not only are you saving for retirement, but your contributions reduce the amount income that is taxed when you file your 1040.

Many employers also match a portion of worker contributions, which helps build your retirement savings. You can maximize your 401(k) by contributing at least as much as your boss will match.

Like an IRA, 401(k) money gains grows tax-deferred until it's withdrawn in retirement.

But also as with an IRA, when it is taken out, taxes are at the ordinary rate. And you also must start taking distributions after you turn 70½.

Similar workplace plans are available to teachers and nonprofit works as 403(b) plans.

As with a Roth IRA, that means the money you eventually take out in retirement is tax-free.

Self-employed plans
While it's usually easier to save for retirement when you're getting a paycheck from a company, self-employed workers need to make sure they don't neglect these savings as they're working to make their businesses a success.

There are several retirement options for the self-employed.

If you own your own small business and have employees, a SIMPLE, or Savings Incentive Match for Employees, IRA might be a good option for you and your staff. It essentially works like a 401(k).

Contributions are made from pre-tax paycheck withdrawals, and the money grows tax deferred until retirement.

A sole proprietor should look into a SEP IRA or a Keogh plan.

A SEP IRA lets you contribute a portion of your income to your own retirement account.

So does a Keogh, but even more than is allow by a SEP. A Keogh, however, is a bit messier administratively.

With both a SEP or Keogh, you can fully deduct your self-employed retirement contributions from your income taxes.

These are just the highlights of these plans. Check them out a bit more closely to see which works best for you, both from a tax saving standpoint and ensurning many comfortable retirement years.