With Mother's Day coming up this Sunday (there's still time to get a card in case you forgot!), today's Weekly Tax Tip is a celebration of parenthood, specifically the tax joys of having kids.

One way to add a child to a family is through adoption. And yes, Uncle Sam does offer some tax help here, too, although unless Congress acts, the adoption tax credit could be seriously limited when Jan. 1, 2013, rolls around.

But some mothers aren't afforded any official recognition, either by the greeting card companies, restaurants offering special meal deals on Sunday or the tax code.

Yes, I'm talking about the moms of furry four-legged children.

Pets are integral parts of our families, but at tax time they can't be counted as tax-reducing dependents.

I only half-jokingly complained about that unfairness when our cat Zeke, pictured below lazing in a box, was part of our family. Everyone knew he was our son, even my grandmother who displayed Zeke's picture on her wall along with the photos of her other human grand- and great-grandchildren. 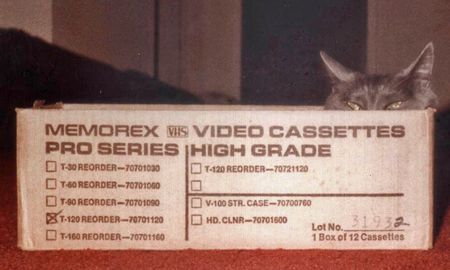 But most lawmakers and tax officials tend to be less inclusive than my Mam-ma of pets as family members.

A few tax proposals for pets: That's why pet owners applaud efforts like the federal HAPPY Act, Humanity and Pets Partnered Through the Years Act, of a few years ago. It would have allowed taxpayers to deduct up to a maximum of $3,500 a year for pet care on their federal Form 1040s.

More recently at the state level, a bill fell just one vote short of allowing dogs and cats to be officially recognized on state income tax returns via a tax credit.

Pennsylvania State Rep. Jesse White, a Democrat from Allegheny, introduced H.B. 1765 in the most recent Keystone State House session. The bill would have provided individuals or families who adopted a pet from a recognized shelter a $300 tax credit on their state returns.

"The point was to encourage adoption and discourage puppy mills and also ease the burden on shelters," White told the Philly.com blog Philly Dawg.

The measure would have capped the credit at $7.5 million or the equivalent of 25,000 adoptions.

New pet parents could only get credit for one pet a year. That provision was added to prevent scam artists from adopting multiple pets and then abandoning them.

And no one who who has been convicted of animal cruelty would be eligible to receive the credit. Sorry Eagles quarterback Michael Vick, no tax credit for you.

Try, try again? Because the chair of the Pennsylvania House Finance Committee wasn't inclined to move the bill along, White's proposal was tacked onto another bill. And that main piece of legislation failed by just one vote.

But White and Pennsylvania animal welfare advocates are heartened by the public and bipartisan legislative support for the pet adoption tax credit.

"The vote was incredibly important as it shows just how much Pennsylvanians care about animals as measured by the calls that flooded into the legislature on just hours notice," said Sarah Speed, state director of the Humane Society of the United States.

Good luck Pennsylvania pets and the families of which you are a part.

If you can eventually get this bill approved, you might just start a trend in other state capitals and Washington, D.C.