Maryland Gov. Martin O'Malley on May 2 signed 294 bills passed by the legislature into law. 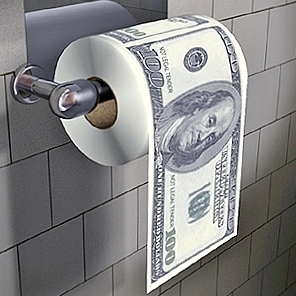 Guess which one got the most press? The flush tax.

The new law's official name is the Chesapeake Bay Restoration Fee, but flush tax is a catchier name and invokes the despised T word. That's always handy rhetoric, especially in an election year.

Under the environmental law, the annual fee will double from $30 to $60 effective July 1. The charge generally will show up in monthly water and sewer bills, but those with septic systems could see the higher fee included in their annual property tax bills.

The new money will be used to upgrade failing septic systems, fund cover crops for fields and make improvements to Maryland's 67 major sewer treatment plants that discharge into tidal waters.

The goal is to improve the health of the Chesapeake Bay.

As a former Maryland resident, I'm pleased at this effort. And I suspect that even in the polarized political atmosphere at both state and federal levels this is one fee that few Old Line State residents have an issue with since so much of the state's identity is wrapped up in that wonderful estuary.

Tax vs. fee: Despite being dubbed a flush tax, the increased wastewater charge in Maryland is officially a fee.

And that raises the perpetual question of what's the difference between a fee and a tax?

In that case, the motor fuel distributor V-1 sued Utah on the grounds that its environmental surcharge on motor vehicle fuels delivered to underground storage tanks was an unconstitutional tax. Ultimately, the Supreme Court of Utah found in favor of the state.

In doing so, the state high court noted that there is no bright line test for distinguishing a fee from a tax. Rather, the determination rests with the purpose of the charge.

A fee raises revenue either to compensate the government for providing a specific service or benefit or to defray the government's costs of regulating and policing a business or activity engaged in by the one paying the fee.

So license fees for hunting and fishing help pay for game wardens, forestry service personnel, equipment and property. The key is that the fees are designated for a specific purpose and paid by those who enjoy those activities.

But a tax, even one applied to a particular good or service, is collected to raise general purpose funds. Taxes collected may be unrelated, or completely disproportionate, to expenditures. And the collecting government can spend the tax money on anything it wants.

In a story back in 2009, New York Times reporter David Segal noted, "Politicians tend to regard fees as more palatable than taxes, and more focused too. If a state needs to finance an infrastructure to oversee fishing, why shouldn't fishermen foot the bill?"

The concern, however, both back then and now, is that governments are using fees to shore up budget shortfalls rather than cover specific costs incurred by specific users.

Presidential fee finesse: The fee vs. tax question also has popped up in the 2012 presidential campaign.

Romney and the Democratic legislature didn't raise or add taxes. But, reports CBS Money Watch, they did rake in "hundreds of millions of dollars for cash-strapped state coffers by approving new and higher fees on everything from marriage licenses to real estate transactions to gun licenses."

And even though Massachusetts residents in general didn't technically face any new or higher taxes, some took a dim view of the fiscal semantics.

Expect to hear more parsing of the fee or tax distinction as the presidential race heats up.

The concept of fees makes sense, but as with many things, they are abused and now amount to little more than taxes. Actually, they are more heinous than taxes, because they are intentionally given the appearance of not being taxes. Then our proud politicians can walk around and declare that they didn't raise taxes. Right.