Small businesses are made the most welcome in Idaho, Texas, Oklahoma and Utah, according to a recent analysis by Thumbtack.com, in partnership with the Ewing Marion Kauffman Foundation.

Those four states each got an A+ grade from small business owners and managers.

Disappointing report cards went to California, Hawaii, Vermont and Rhode Island, each of which received an F.

New York eked out a D. 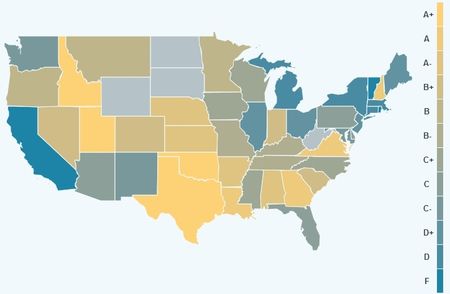 Click map for a larger, interactive version,
as well as a text links to the states.

The grading system was designed by Thumbtack.com, a San Francisco-based online marketplace of service professionals, and the Kauffman Foundation, a Kansas City, Mo., foundation focusing on entrepreneurial issues, in an effort to assess the many factors that are important to different businesses.

Taking taxes into account: In addition to coming up with an overall grade for "Overall Business Friendliness" in the states and cities within their borders, the survey also provides rankings and grades for several categories: ease of starting a business, hiring costs, regulations, training programs, networking programs and each state's current economic health.

Taxes are part of the regulations category.

A ranking of state tax burdens on businesses must account for all the different ways in which a small business is taxed, according to the survey's report. By asking the small businesses themselves, all relevant taxes are accounted for, while irrelevant ones are excluded.

That said, some states came out better overall when it comes to taxes than did others.

Low tax grades were given to Washington, which got a D, and California and New Mexico, which both received an F for tax issues.

At the other end of the grading scale, Oklahoma's worst business feature was its tax code, but the Sooner State's tax laws still got a B.

Florida received a B+ for its tax code.

Grades of A+ for tax went to Nevada and Delaware.

In fact, the survey found that licensing requirements are nearly twice as important as tax-related regulations in determining a state's overall business friendliness.