Family farms are among the most iconic of American symbols.

That's why these patches of agrarian productivity often are invoked in tax fights, most notably by folks who want to do away with the federal estate tax.

This tax is often cited, usually incorrectly, as a killer of family farms. Internal Revenue data show that only a fraction of the millions of estates left each year involve farm assets. And the New York Times reported that in 2001 the pro-repeal American Farm Bureau Foundation could not cite a single case of a family farm lost due to the estate tax.

Still, the possibility of heirs of Grant Wood-like farmers sacrificing generations of rural property ownership to pay the tax collector is a powerful anti-tax image. 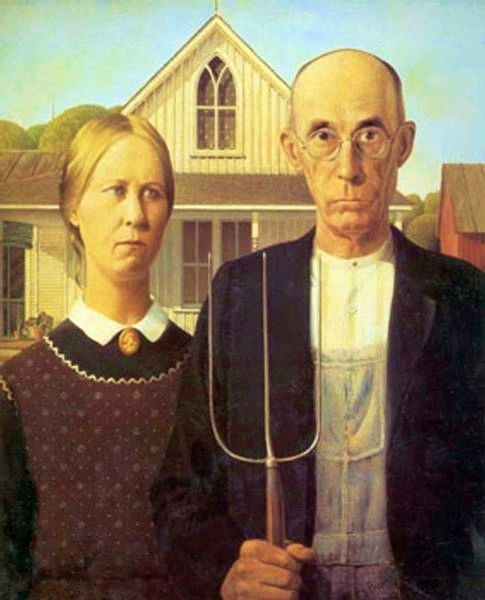 Now another farm/federal tax collection battle is in the spotlight.

High Court vs. family farms: The U.S. Supreme Court today issued a 5-to-4 decision that requires an Arizona farming couple to pay capital gains taxes on proceeds from selling their property to settle their bankruptcy debts.

Lynwood and Brenda Hall got $960,000 for their 320-acre farm in Willcox, Ariz. The Internal Revenue Service argued that the Halls' Chapter 12 bankruptcy sale produced capital gains taxes of $29,000.

The Halls initially proposed a plan of reorganization under which they would pay off outstanding liabilities with proceeds from the sale. But the Internal Revenue Service objected, saying the Halls owed the full federal capital gains tax.

The Halls didn't dispute the tax amount, but wanted the 29 grand treated as part of the bankruptcy, paying part of the tax and having the court discharge the rest.

The IRS contended that taxes arising from a post-petition farm sale remain the debtors' independent responsibility, not the estate's obligation.

Lower federal courts sided with the IRS. Now so has the country's highest court.

Justice Stephen Breyer wrote the dissenting opinion, saying that when Congress amended Chapter 12 of the bankruptcy code, it intended the filing to help "family farmers in economic difficulty reorganize their debts without losing their farms" and to "enable the debtor to treat certain capital gains tax claims as ordinary unsecured claims."

This ruling, wrote Breyer, "prevents the amendment from carrying out this basic objective."

In a December 2011 floor speech, the Iowa Republican explained why he supported the 2005 bankruptcy changes:

"Simply put, I wanted to make sure that family farmers in a Chapter 12 case could, in fact, sell portions of their farms to effectively reorganize, without the capital gains taxes jeopardizing the reorganization. The very purpose of Chapter 12 and bankruptcy in general is to allow for a fresh start. Unfortunately, this wasn't happening."

Grassley's proposed remedy was to create a very narrow exception that was enacted in the 2005 Bankruptcy Reform law.  Basically, only in a Chapter 12 case, if a farmer sold farm land that resulted in a capitals gain liability, then the IRS claim would not receive priority status. Rather, the tax man would have an unsecured claim, which means such claimants might get paid something, but not necessarily the entire amount owed.

Grassley's language also prevented the IRS from vetoing a plan's confirmation, making it possible for the owing farmer to try to reorganize.

From a bankruptcy point of view, Grassley said, this approach makes complete sense:

"The bankruptcy estate then sells the land, post-petition, and that results in capital gains that are owed to the IRS. These taxes, incurred by the estate post-petition, are administrative expenses, which receive priority status. So, my language, enacted into law in 2005, stripped the priority claims owed to the government, in this very specific instance, and made them general unsecured claims."

The change was necessary, said Grassley, to keep the IRS from getting consideration before small businesses, suppliers and small local banks that extend credit and supplies to farmers.

Obviously the IRS doesn't agree. Even after the law change, the IRS contended that the tax liability created is the responsibility of the individual and not of the bankruptcy estate.

According to some bankruptcy experts, Grassley's efforts have made Chapter 12 the most debtor friendly chapter in the bankruptcy code.

With the Supreme Court's affirmation of the IRS' point of view, look for Grassley to try yet again to put his mark on bankruptcy law and carve out a farm tax position that he thought he made clear seven years ago.