Coming soon: 'Fiscal Cliff,' the biggest economic and tax disaster of all time!

Summer is almost here and the Congressional Budget Office (CBO) is getting in the spirit of the season.

The nonpartisan agency of Congress that produces economic analysis and estimates of the cost of legislation just released a tax and spending cut evaluation worthy of the big-budget summer blockbusters coming soon to a movie theater near you. 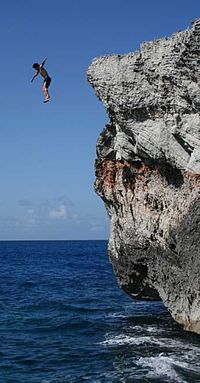 Although the setting is still more than half a year away, the CBO study has a title that disaster film director Michael Bay would envy: "Falling Off A Fiscal Cliff."

That's how the CBO characterizes what could happen if the Bush tax cuts were allowed to expire on Jan. 1, 2013, and automatic spending cuts, created under the terms of the summer 2011 debt ceiling deal and inability of the Super Committee to come up with an alternative, take effect.

That combination, according to the budget analysts, would probably throw the economy back into a recession.

The CBO report says that the U.S. economy would shrink by 1.3 percent in the first half of next year if higher tax rates -- elimination of the 10 percent income tax bracket and hiking the top rate to 39.6 percent -- and more than $100 billion in automatic cuts to the Pentagon and domestic agencies are allowed to kick in as scheduled.

I almost typed planned instead of scheduled in that previous sentence, but the truth is that no one, on Capitol Hill or elsewhere, really planned on us getting even this close to what also is being called Taxmageddon, which itself is a pretty cool name for a disaster flick.

Reasonable folks, and I concede they are becoming more scarce every election, were sure that Congress and the Obama Administration would have a deal in place by now under which each side would get a little of what it wanted and give up some points to the loyal opposition.

Incredible policy decisions: After all, it doesn't do anyone of any political persuasion any good to commit fiscal homicide and/or suicide, does it?

Apparently, some folks think that's OK. In fact, they believe it's what is needed.

They, however, are thinking about elections and not about the people who vote in them.

Of course, if more of us actually did get to the polls and participated in the political process in other constructive ways, we might have saner laws and legislators.

But, hey, I'm not here right now to blame the victims, which are all of us who have to live with the results of Capitol Hill decisions. I'll save that for another blog post.

Today, I just want to alert you to what possibly awaits while there's still time to contact your Representative and Senators.

Let your lawmakers know that you've seen the CBO trailer and you are part of the cinéma vérité focus group that wants changes to the projected disastrous economic ending.

You nailed it, Len. The Bush Administration's sunset timing was a perfect political ploy and all of Capitol Hill let his get away with it. Now they are just fumbling around trying to figure out how to pass the buck to someone else. We're in a terrible cycle where too many lawmakers and taxpayers are afraid to face hard truths and take tough action for longer-term corrections and good policy.

Of course, you might view the creation of all these unexploded bombs an act of sabotage in the first place. Policymakers don't legislate any more. They play games of chicken and gotcha.

Bursting through the debt ceiling might be the biggest disaster of all time, but probably not because the 14th amendment requires us to make payments on the debt so enforcing the debt ceiling is probably unconstitutional. The tax increase+spending cut would be dumb economic policy in a recession, but not an unprecedented disaster. Its effects would almost surely be less disastrous than the subprime mortgage fiasco, which was caused almost entirely by boneheaded federal policies--both legislated and at the Fed.