You've probably heard that Amazon reached deals with Nevada and Texas to start collecting sales taxes from customers in those states who buy online products.

That's good news for the treasuries of these two no-income-tax states that rely heavily on sales tax revenue.

And it's bad news for the many previously untaxed customers in those states of the online retail giant.

But as the agreements were being struck, an interesting online conversation (how appropriate!) was going on among tax professionals about why the push to add a new tax when there's already a mechanism in place to get this sales tax money.

You got it. We're talking use taxes.

Or, as they commonly are called, useless taxes.

Added efforts to collect use taxes: The 45 states and the District of Columbia that collect sales taxes at the state level also have corresponding use taxes. Use taxes generally are the same rate as a state's sales tax.

As the name implies, the use tax is charged against goods that a person buys elsewhere but brings into -- or has delivered -- into the purchaser's resident state.

Being good citizens, we're all supposed to do the math and remit the appropriate use tax sales to our home state's tax office.

You can stop laughing now.

The big problem is that most people truly don't know about use taxes. But even when they do, they tend to ignore them.

In an effort to educate taxpayers and get more of their money, state tax officials have included a line on state income tax forms where filers can report and pay any uncollected use tax. The tax publisher CCH says that was the case on 2011 returns in 27 states and Washington, D.C.:

*Although Arizona collected around $744,000 this year in use taxes via state income tax return filings, it has repealed the use tax reporting effort. The cancellation of the year-old reporting requirement was overwhelmingly approved by the state legislature after complaints that it was too burdensome since people don't tend to track whether sales tax is collected for online purchases. The measure doesn't repeal Arizona residents' obligation to pay use tax owed, just the requirement that taxpayers put the amount on their state income tax returns. The line will not be on the state's 2012 tax returns filed next spring.

Don't know and don't care: "Many people are unaware of their obligation to pay use tax," CCH senior state tax analyst Carol Kokinis-Graves told Accounting Today. "Sometimes online and other mail order retailers do not collect the tax from the purchaser. However, even when a retailer doesn't collect the tax, consumers are required to report and pay the use tax."

But, as most of us know from first-hand experience, that reporting and paying, even with the state's intensified collection focus, is minuscule.

Forcing e-tailers to collect: So states also have been focusing on the online retailers via so-called Amazon tax laws designed to get the sellers to collect and remit sales taxes. The CCH map below provides an overview of state efforts to enact broader nexus rules. 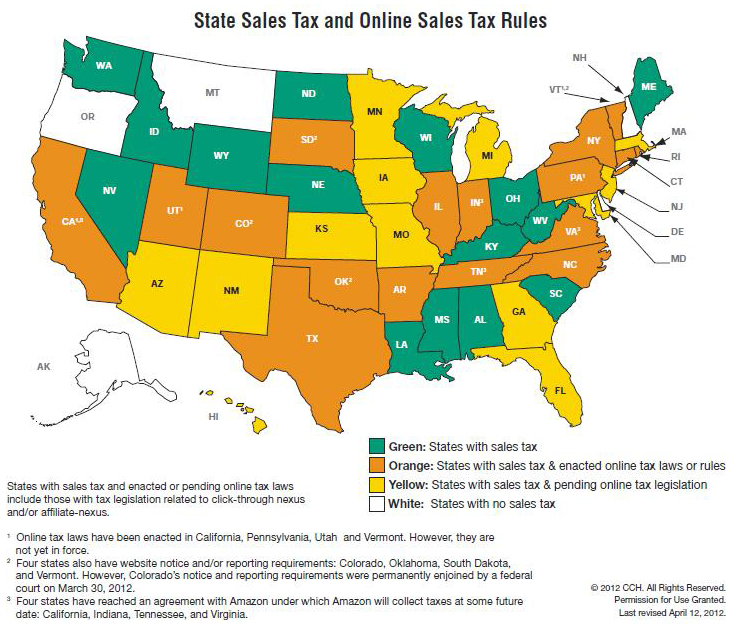 The states are trying to require online retailers to collect sales and use tax even if (a) the retailer does not have a physical presence in the state but does solicit sales through online links or pays commissions to an in-state business, known as click-through nexus, or (b) if the retailer has an affiliation with a company doing business in the state, known as affiliate-nexus.

As the recent Amazon deals with Texas, Nevada and earlier with California and Tennessee indicate, it appears that the state sales tax efforts to collect from the sellers seem to be working, albeit slowly in most cases.

Questioning the redundancy? Although there is much difficulty in getting people to pay use taxes, some CPAs who gathered at a LinkedIn forum recently to discuss the existing and proposed rules think that another tax is too much.

Several of the tax pros opined that state tax collectors are trying to get someone else to do their job.

"I think it is about time the states got off the 'it is the e-retailers that are costing our state billions in lost revenue' bandwagon and actually started enforcing the use tax laws that have been on the books for fifty plus years," wrote James Sutton, an attorney, CPA, partner at the Florida firm Moffa Gainor & Sutton P.A., and @FloridaTax on Twitter.

"You want to put e-retailers and brick and mortar companies on and equal footing? Then hit taxpayers with penalties and interest for not reporting and paying use tax on Internet purchases. That will force people to see the value that brick and mortar retailers are providing," said Sutton.

"James, great comment! You are so correct, there's so much banter on the need to force on-line retailers to collect sales tax to 'level the playing field,' but the reality is that the corresponding use tax is already owed by residents in states that impose a sales tax on all of their internet purchases (where sales tax wasn't charged)," wrote Dion. "Unless a purchaser is a resident of one of the five states without a sales tax -- Alaska, Delaware, Montana, New Hampshire, Oregon -- they owe the equivalent use tax on their 'tax-free' purchases.…[I]nstead of trying to pass legislation which throws out the constitutional protections of Quill [the U.S. Supreme Court rule defining nexus], states should do a better job of educating their residents on the requirement to pay their state's use tax on their internet purchases and make it easy for them to do so by incorporating a line on their state's resident personal income tax forms."

If that doesn't convince, you Dion has lots more to say about Amazon taxes at SalesTaxSupport.com.

Throwing in the use tax towel: I definitely appreciate these two professionals' arguments that the world doesn't need redundant tax laws.

But I also understand why states seem to be throwing in the towel when it comes to enforcing the existing sales tax/use tax laws.

Taxpayers are like recalcitrant children when it comes to complying with the use tax laws and the state tax offices are the exhausted parents looking for any outside help to get the "kids" and their treasuries in line.

What do you think? Should states concentrate on enforcing the use tax laws already on the books? Or are they justified in trying to get remote sellers to help them collect sales taxes?

First, I want to be clear that I am not an advocate for continuing to increase taxes. However, I do think it is an unfair advantage that Amazon has over the small Mom and Pop shops. I mean Amazon can beat them on price and they don't have to charge sales tax? Come on. I think enforcing laws already on the books is OK, not sure about creating new tax laws though...

The problem with trying to collect use taxes from individuals is that it just isn't practical. For anyone that does a lot of online purchasing, it is an onerous task. Who is going to keep all of that paperwork? How could it ever be audited? It would cost more to audit than the states would capture in additional taxes.

I think it makes more sense for companies to collect sales taxes, which isn't that difficult with today's technology. The bigger issue is sales tax reporting. It would be really nice if there were a simple standard way of reporting that could be electronically transmitted to all states at once. Filing 45 sales tax returns is a huge burden to place on small businesses.