Your tax receipt from the White House

With the individual tax return filing deadline next week, federal taxes are taking center stage in the presidential and Congressional campaigns.

This bill, introduced by Sen. Sheldon Whitehouse (D-R.I.) and also known as the Buffett Rule act, would raise taxes on those earning more than $1 million and impose a minimum tax rate for these filers of 30 percent.

Whitehouse's proposal probably won't get the 60 votes it needs to advance in the divided Senate, but that's not the main reason, right now, for the vote.

Making Senators go on record the day before Americans' tax returns are due on a bill targeting the wealthiest taxpayers is an election year tax shot across the political bow.

Meanwhile, the GOP is busy promoting the House budget, crafted by that party's budget guru, Rep. Paul Ryan of Wisconsin. It would collapse the current six tax brackets to just two, 10 percent and 25 percent. To pay for the fewer and lower tax rates, Ryan would eliminate loopholes, although he has yet to say which loopholes.

And now, the White House has its own tax fight contribution.

The Obama Administration has revised its interactive Federal Taxpayer Receipt. 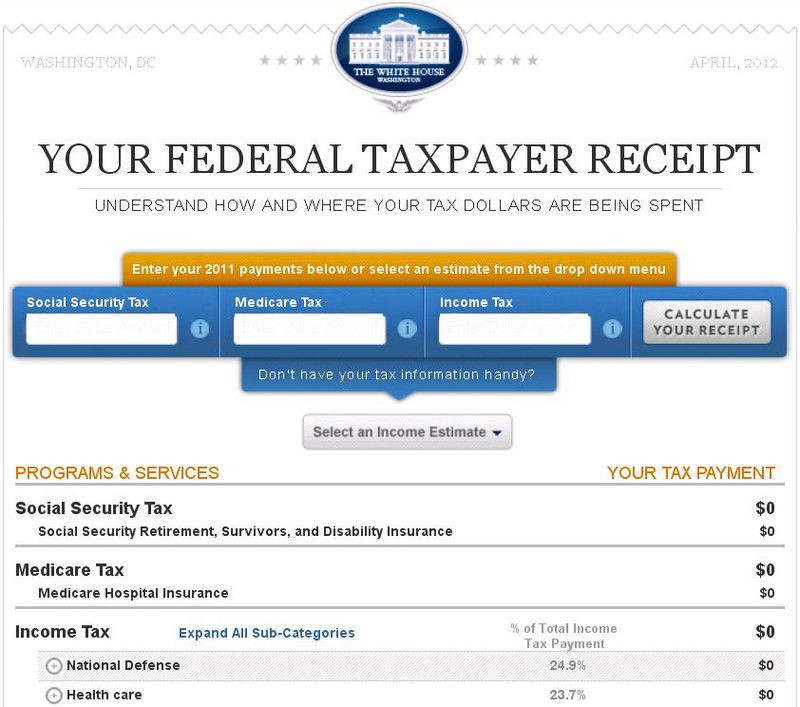 Click image to go to the interactive receipt tool.

You can enter in your personal income data or select an earnings range and then find out where your tax dollars go.

Even without dollar amounts to crunch, the percentage of total income taxes paid column is interesting. It's no secret that most people don't understand how their taxes are distributed.

Health care, such as Medicaid, children's health programs and Medicare, account for a total nearing 24 percent of taxes collected.

Unemployment benefits, an issue over which Congress repeatedly deadlocked as part of the payroll tax cut extension fight, accounts for just 2.3 percent of federal taxes.

And all of America's science, space and technology programs consume just 1 percent of our taxes.

Of course, the areas of "additional government programs" (yes, the line item is that vague) at almost 8 percent and net interest payments of just more than 8 percent will continue to be the focus of political as well as fiscal discussions.

When you finish your tax return this year, plug your earnings data into the online tax receipt program and see where Uncle Sam is planning to use your money.

Of course Obama admits that the Buffet rule won't really raise any money, it's strictly an appeal to class envy that at best will be neutral, or slightly harmful to the economy.