Did the change in the rules that made it harder to buy over-the-counter medicine with money from tax-advantaged medical accounts give you a major headache?

The House Ways and Means Subcommittee on Oversight will hear this afternoon from folks about the real-life effects of the restrictions on Flexible Spending Arrangements (FSAs), Health Savings Accounts (HSAs) and Health Reimbursement Accounts (HRAs).

Covered, then not covered: People enrolled in these accounts cheered in 2003 when the Internal Revenue Service changed the rules and allowed money from the tax-saving medical accounts to be used to pay for over-the-counter (OTC) items.

Pharmacies and groceries stores also were delighted, as folks loaded up on cough medicine, aspirin and the like at the end of the year to use up their spending account dollars.

As part of the Patient Protection and Affordable Care Act, OTC treatments are no longer reimbursable medical savings account expenditures unless the patient gets a doctor's prescription. 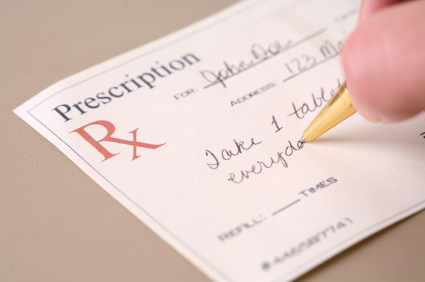 Talk about a sick feeling!

You have a cold and know that icky green syrup will do the trick, but you have to call your doctor and/or make an office visit to get an Rx so that your medical account administrator can pay for the treatment.

Many folks don't bother and end up paying for off the shelf medications on their own. That, says Oversight Subcommittee Chairman Charles W. Boustany, Jr. (R-La.), is a tax increase.

So why the change? As are most Congressional acts, it was a way to raise a few more dollars.

And a lot of that money was being subsidized by tax-free medical savings account reimbursements. 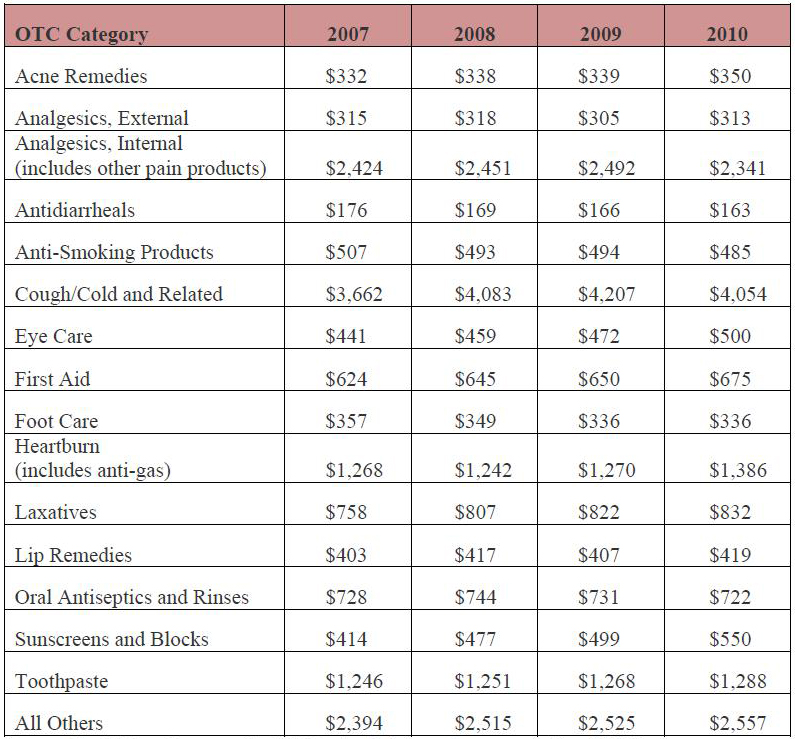 Source: The Nielsen Company (total U.S. food, drug, and mass, excluding Wal-Mart). Sales figures are approximate for 52 weeks ending the Saturday prior to January 1 of a given year. Sales are in millions of nominal U.S. dollars. A few categories include a combination of OTC medicines as well as health-related products which are not classified as medicines by the Food and Drug Administration. Click image for a larger view.

It also was an effort to make the medical spending account rules and the itemized medical deductions requirements the same. The Joint Committee on Taxation explains:

A tax subsidy for over-the-counter medicines not prescribed by a physician may be likened to providing a deduction for personal expenses. Such medicines (e.g., aspirin and cough syrup) are often routine purchases made by many taxpayers. Further, a subsidy for nonprescription over-the-counter medicines may complicate taxpayers' effort to comply with the law. The task of distinguishing products that are medical from those that are not may prove difficult for many over-the-counter products, such as toiletries and products that promote general health. Thus, continuing to subsidize such expenses may lead more taxpayers to claim tax benefits for such general health products. Consequently, some argue that providing a tax subsidy for the purchase of nonprescription over-the-counter medicine is not integral to the policy objectives of the present-law provisions for health expenses, and may be counter to such policies.

Across-the-board opponents: Critics of the OTC Rx requirement argue that it could result in unnecessary doctor visits and thereby increase the cost of health care.

And that, they say, could actually offset any added revenue from not allowing easy OTC reimbursements.

Boustany, himself an M.D., acknowledges that argument in the hearing announcement, noting that physician groups have suggested that the OTC medication prescription requirement has imposed an unreasonable administrative burden, resulted in longer waits for appointments and has increased health care costs.

"Too often in Washington, officials make decisions about health care policy based on abstract theories and budgetary scores. This hearing will focus on how one decision in particular -- the limitation on how consumers may use their own FSA, HSA or HRA money -- has adversely affected access and affordability for families, physicians, and job creators," said Boustany.

Witness list: Scheduled to testify on the OTC medications reimbursement issue are --

I'll try to check in on the hearing this afternoon.

And I'll definitely at least come back here and provide links (done; see above) to the witnesses' prepared testimony as soon as it is available.

Good move to reasonable policy: We all know that Congressional hearings often are as much about politics as real policy.

And Boustany is making hay with his statements about the OTC rule leading to increased overall health care costs and tax increases on American families.

But I'm giving him a pass on the rhetoric because he's right.

This was a stupid rule change.

I hope that today's Ways and Means subcommittee review is a big step toward reinstating the easier OTC is OK approach to medical spending account reimbursement.