Lashing out at tax loopholes

No, not PBS, although I do watch Nova, Mystery and Downton Abbey. This time I'm talking about the April 13 episode of the classic TV game show Jeopardy.

That day the Final Jeopardy category was word origins.

The answer: An exploited part of a law, originally it meant an opening in a castle wall used to look at or shoot at an enemy.

The correction question: What is a loophole?

What a perfect way to close the program on the Friday before our federal tax returns were due.

Tracking down tax loopholes: I thought about that episode again this past weekend after reading about the New York Times story on how Apple is able to utilize many sections of the Tax Code to reduce what it owes Uncle Sam.

The typical analysis is that Apple and other companies and individuals are using and/or abusing loopholes, a word that has become synonymous with taxes.

The public and politicians decry tax loopholes. And the implication is that the person or business using them is doing something wrong.

But the fact is that loopholes usually are quite legal. 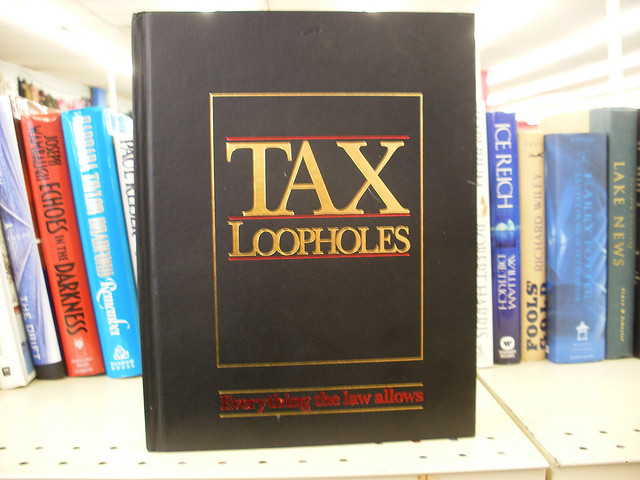 Some tax breaks are viewed as loopholes because they benefit another taxpayer instead of us. It's the sort of the loophole corollary to that famous "tax the man behind the tree" approach to taxes.

Other times, savvy taxpayers or the experts they hire find creative ways to legally apply tax laws in a manner that the Congressional tax writers didn't foresee.

These "uh-oh" situations are the perfect tax example of unintended consequences, and they are almost always denounced as tax loopholes.

Eye on Apple et al: A big part of the Apple article is no surprise. The tech giant, like many other major U.S. corporations, is incredibly adept at discovering options in the tax code that help them avoid paying high U.S. taxes.

Is that good? Is it fair?

Should the tax code, for both individuals and companies, be changed so that there are fewer -- don't kid yourself into thinking they'll ever be totally eliminated -- loopholes?

Those are this election year's preeminent questions. And there are no easy or unified answers.

We have to consider not only the U.S. tax system, but our county's whole approach to business.

This issue came up last September when Warren Buffett was pilloried online when it was revealed that the man who says he pays too low a tax rate signed off on tax strategies that allowed  his company, Berkshire Hathaway, to legally pay as little to the Internal Revenue Service as possible.

What I posted then applies to Apple now:

Cutting Buffett and his company some slack: Yes, 14.175 percent is substantially lower than the top corporate tax rate of 35 percent. But Berkshire Hathaway is a public company and part of its job is to make shrewd financial and tax moves for its investors.

As long as there are legal ways to reduce a corporation's taxes, then all companies deserve to -- and in the eyes of their shareholders must -- claim them.

And at least Berkshire Hathaway didn't end up on the Institute for Policy Studies list of companies that pay their CEOs more each year than they pay in taxes.

As for the company's almost 10 years of tax disputes with the IRS, that too is standard operating procedure.

In both business and individual tax situations, if the tax man says you owe more than you think you do, you're entitled to dispute that assessment. To not do so is just plain stupid.

So go ahead and think Buffett is crazy for wanting to pay more personal income taxes.

But what Buffett wants on a personal tax level is unrelated to his company. He has a responsibility to Berkshire Hathaway, which in turn reports to its shareholders. To fulfill that fiduciary obligation, Buffett and his company are not doing anything wrong by trying to get the best, legal low-tax outcome possible.

Ch-ch-changes? Are we, taxpayers and the men and women we sent to Congress, ready to change the American way a bit and eliminate some legal tax avoidance opportunities, both the many quite obvious and accepted ones as well as those we characterize as sketchy tax loopholes?

That, my friends, is the gazillion dollar election year tax question.

Are Apple and the other corporate giants whose talented tax teams have been able to cut business tax bills to zero or even produce refunds willing to change a system that they've mastered?

I suspect that right now the companies, and especially their tax specialists who are probably receiving very nice paychecks, are OK with the convoluted tax corporate tax code.

What about individual taxpayers?

We always complain, but when tax reform talk get serious about doing away with tax preference items, people start backtracking.

Many taxpayers apparently are OK with the tax devil they know and want to keep carping about the unfairness of loopholes rather than accept the possibility that we might actually have to give up one of those tax breaks.

As I said, tough questions with equally tough answers. What's your response?